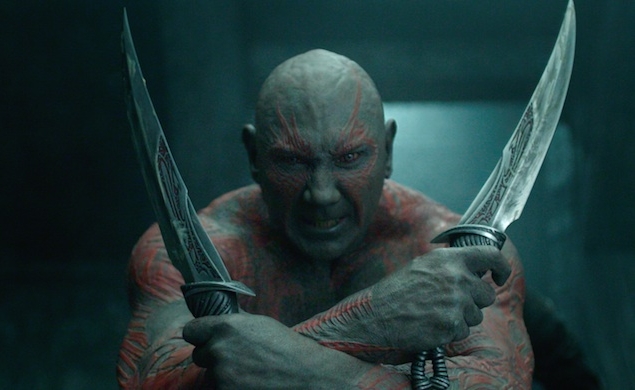 The latest James Bond adventure will indeed include some baddies for Daniel Craig to battle, and not just the kind in his head and set to the dulcet tones of Adele. (“Lettttt the skkkkyy fallll.”) Last week, the Sam Mendes feature reportedly locked down a femme fatale in Lea Seydoux, and now the film has added in a henchman to hench around with and do bad against Bond himself.

Latino Review reports that Mendes’ production has just nabbed its newest bad guy, with Guardians of the Galaxy star Dave Bautista on board to play the naughty Hinx. A professional wrestler by trade, Bautista has dabbled in acting before breaking out with this summer’s Marvel blockbuster, with small roles in actioners like Wrong Side Of Town and The Man With The Iron Fists, but Guardians saw him going full body slam on this acting thing.

According to Latino Review, Hinx is imagined as an instantly iconic henchman, in the vein of Richard Kiel’s Jaws (Moonraker and The Spy Who Loved Me) and Harold Sakata’s Oddjob (Goldfinger). (Fun fact: Bautista’s Guardians character, Drax, shares a name with Moonraker baddie Hugo Drax.) The original casting call asked for someone who is “an imposing extremely physically fit actor” and who could effectively battle Bond, go through stunt training, and drive a vehicle. Bautista certainly has the physicality down pat, though it’s hard to judge his full acting abilities from his role in Guardians, which essentially called for him to be a strange (but amusing) combination of hulking and humorless. Perhaps Hinx can crack some jokes alongside bones?

The 24th Bond film (are we really still just calling it Bond 24?) will start filming in early December, with shooting locations reportedly ranging from England’s own Pinewood Studios to Austria, Rome, and Morocco. Oh, a globe-trotting Bond, the very best kind.