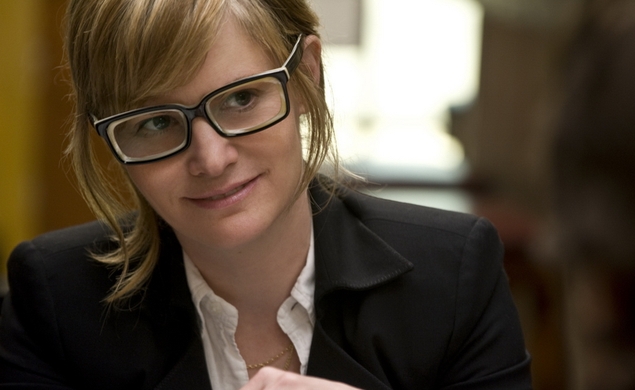 Now that it’s been confirmed that Quentin Tarantino’s gestating Western The Hateful Eight is really, really happening (for reals), the long, slow trickle of production details has begun. Though rumors have circulated that mainstays of the Tarantino Repertory Players such as Samuel L. Jackson, Kurt Russell, Tim Roth, and Michael Madsen will appear, Tarantino has now confirmed his leading lady. TheWrap reports that Jennifer Jason Leigh will tackle the role of Daisy Domergue, “a woman wanted for murder who begins the film in the clutches of a bounty hunter.” The film takes place in post-Civil War Wyoming, with Domergue held in a stagecoach as two bounty hunters and a sheriff make their way to town, where she can be brought to justice. They’re waylaid by a nasty blizzard, and take shelter in a haberdashery along with a few other to-be-determined characters. With Tarantino’s signature slow-burn intensity, tensions will rise. Eights will be hateful. Either way, viewers can expect a generous portion of hyper-stylized bloodshed and many discursive conversations about 1860s pop culture. (“Wilkie Collins, Woman In White, it’s all about big dicks.”)

Bruce Dern, a relic from the days of yore when American audiences eagerly raced out to see no-holds-barred Westerns in theaters, will also star in the film, though his role has not yet been revealed. And as previously noted, Tarantino will do everything within his power (which, he has demonstrated, includes straight-up purchasing one of the nation’s most august cineplexes) to bring his newest to viewers in 70mm. It’ll be glorious: You’ll be able to soak in every line on Dern’s craggy, inscrutable face with gorgeous clarity.