Our next (Scary) Movie Of The Week: Stuart Gordon’s Re-Animator 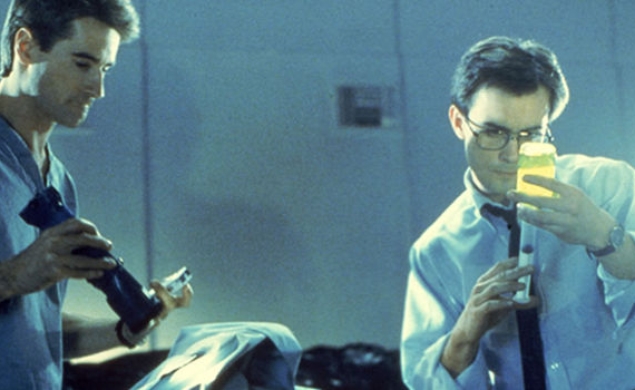 “Don’t expect it to tango,” Herbert West (Jeffrey Combs) tells his reluctant partner Dan (Bruce Abbott) as they prepare to bring Dan’s dead cat Rufus back to life. Combs’ delivery is dry. Rufus, on the other hand, is pretty wet, drenched in blood and oozing gore from his previous adventures dying and being brought back to life. And that’s Re-Animator in miniature: a bizarre, low-budget combination of deadpan black humor and gore that adapted several then-obscure H.P. Lovecraft stories, unexpectedly won over audiences and critics in 1985, and has gone on to enjoy a long afterlife of its own.

The film debut of Stuart Gordon, a theater veteran who decided to make a horror film when told it had the best chance of making back its money, Re-Animator still looks extreme nearly 30 years later. There’s scarcely a scene without some kind of gross image. It’s also extremely entertaining, offering a disarming combination of humor, over-the-top imagery, and solidly crafted suspense. In addition to my Keynote piece on the film, we’ll also be discussing it in a Forum, and Andrew Lapin will look at Gordon’s other adventures adapting Lovecraft.

The film’s trailer gives away too much, but here’s a trailer for 2011’s Re-Animator: The Musical, also directed by Gordon and featuring George Wendt: