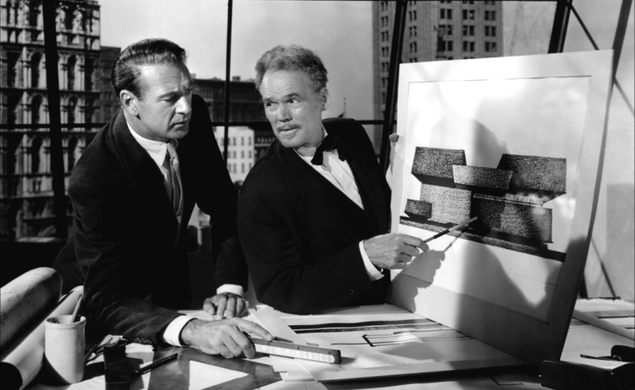 The third entry in the epic Atlas Shrugged trilogy snuck into theaters like an Objectivist ninja last month. The film’s release came as a surprise for many, even folks unhealthily obsessed with Objectivism, Ayn Rand, and egregiously horrible entertainment, like myself. But the curiously muted release of the Atlas Shrugged trilogy, an epic franchise that has earned a worldwide shrug of indifference from critics and audiences alike, is hardly Rand’s first dalliance with the movies. In the late 1940s, she realized her dream of making an A-picture out of one of her novels with King Vidor’s cult melodrama The Fountainhead, this week’s entry in You Might Also Like. It’s a film that might appeal to people who would like to see what one of Rand’s insane jeremiads would look like if made by actual professionals who knew what they were doing.

In the predictably godawful 2011 documentary Ayn Rand And The Prophecy Of Atlas Shrugged, Albert Ruddy, the producer of The Godfather, talks about how in the 1970s he had acquired the rights to Atlas Shrugged and planned to make an adaptation starring four of the biggest, most prestigious names in international film. Ruddy’s adaptation would star Faye Dunaway as fiery, passionate railroad heiress Dagny Taggart, Alain Delon as the dashing Francisco, Clint Eastwood as Hank Rearden, the fiery, passionate male lead (fire and passion are prerequisites for being an impossibly idealized Rand protagonist), and Robert Redford as John Galt, the mysterious figure whose heroic retreat from society sparks a revolution of thought. According to Ruddy, everything was set for a big, sexy, blockbuster romance that would disseminate Rand’s ideas to a worldwide audience. There was only one catch: Ayn Rand demanded script approval. She wanted her magnum opus told her way, and that proved to be a deal-breaker, because there was no way to transform a book that ran well over a thousand pages, dozens devoted to a single speech alone, into a two-hour motion picture without making a whole lot of changes and a whole lot of compromises. Ruddy’s story is almost too perfect, since it affords Rand an opportunity to directly live out her ideals at tremendous personal and professional costs: A 1970s movie version of Atlas Shrugged could have made Rand millions, but it would also mean betraying the ideals at the core of her philosophy.

From past experience, Rand knew firsthand all the things that could prevent Hollywood from doing its sacred duty of bringing her work to the screen exactly as she saw fit. Rand sold The Fountainhead to Warner Bros. on the grounds that she write the screenplay, which the studio could not change a word of. Warner Bros. more or less lived up to its end of the deal, and while Rand was initially positive, according to the book 100 Voices: An Oral History Of Ayn Rand, she was later so disgusted with the results that she refused to sell her novels to a film company that wouldn’t let her pick the director and screenwriter, and presumably let her edit the film while she was at it.

In Ayn Rand And The Prophecy Of Ayn Rand, one of the writer’s admirers notes that Rand was frustrated that people saw The Fountainhead as kind of a weird, sexy story about architecture, and missed out on its themes of individualism versus collectivism. That is all the more remarkable considering that it’s only a slight exaggeration to state that every scene, every speech, every charged look or lustful glance very directly addresses the theme of individualism (yay!) versus collectivism (boo!) in the most brutally direct, unsubtle terms imaginable.

The film’s protagonist is Howard Roark (Gary Cooper), a heroic architect and that rarest and most precious of resources: a man of integrity in a vulgar and corrupt world. As such, he is the natural enemy of foppish dandy Ellsworth Toohey (Robert Douglas), a sentient monocle of a man who occupies a position of incredible power and prestige: He is an architecture critic at a daily newspaper. In The Fountainhead’s insane world, this gives him a level of power greater even than that of Gayle Wynand (Raymond Massey), the paper’s William Randolph Hearst-like owner. It’s easy to see why he’s so popular and influential: In a typical bon mot that appears in his column, Ellsworth quips, “Artistic value is achieved collectively, by each man subordinating himself to the standards of the majority,” a one-liner so killer he repeats it in conversion with his boss.

So you can only imagine how enraged Ellsworth is by the mere existence of a man like Howard Roark, a firebrand iconoclast who would sooner work on a chain gang than subordinate himself to the standards of the majority. Ellsworth commits himself to destroying Roark and all he stands for, namely truth, beauty, individualism, greatness, Objectivism, artistry, self-determination, and everything else that is good in the world that doesn’t involve helping anyone. But what that sniveling, sneering foppish dandy Ellsworth hates more than anything is the new, the original, the authentic, the unprecedented innovation that moves society forward and terrifies small-minded, power-obsessed ghouls like himself. That’s exactly what Howard Roark and his powerful modernist style of architecture represents: the new.

So when Roark designs a revolutionary building for a self-made mogul unafraid of confronting the prejudices of the ignorant, mediocrity-loving, collectivist-minded rabble, Ellsworth uses the newspaper as a vessel to go to war with Roark and try to destroy him and all he represents. Roark has an ally, however, in Dominique Francon (Patricia Neal), a beautiful, brilliant socialite who admires Roark’s genius as an architect, as well as his sinewy muscles and roughshod good looks, when she sees him working a drill in a quarry during a temporary sabbatical from architecture, in one of the film’s many absurdly phallic tableaus.

Roark and Dominique are two of a kind: renegade geniuses single-mindedly committed to not helping society, who decide that that if they join forces they can not help society and each other twice as effectively. Eyes wild with intensity, Neal delivers a stirringly operatic performance that, like the film itself, operates in a hysterical emotional register throughout. Dominique is in clear erotic thrall to Roark, and in the most controversial scene in the film and book, falls deeply in love with him after he takes her sexually by force, something Rand and the film seem to view in a positive light.

Roark struggles to find jobs because of his utter unwillingness to compromise his vision, but he eventually has an opportunity to design a housing project, albeit with a sniveling would-be competitor as his front. Roark agrees to design the projects for his former classmate on the condition that it not be altered in any way. When the architect pretending Roark’s design is his own implores him to think of it as a humanitarian project, Roark coldly rejects the notion that he would ever want to do anything as gross and pathetic as helping others for the sake of helping others, arguing, “The man who works for others without payment is a slave. I do not believe slavery is noble. Not in any form, nor for any purpose whatsoever.” And when the designs are changed and compromised, Roark feels honor-bound to heroically blow up the housing projects rather than let hundreds of impoverished poor people live in houses that didn’t perfectly reflect their architect’s sensibility.

In The Fountainhead, an architectural critic commands the kind of power Stalin and Hitler could only dream of. When he is fired, the rest of the staff walks out in protest and everyday Joes and Jills picket outside the newspaper for the reinstatement of this loquacious snob, this William F. Buckley-like exemplar of preening aristocratic arrogance. He is an unelected, unofficial dictator who whips his inexplicably adoring public into a frenzy with hot rhetoric like, “Man can be permitted to exist only to serve others! He must be nothing but a tool for the satisfaction of their needs! Self-sacrifice is the law of our age! The man who refuses to submit and serve, Howard Roark, the supreme egoist, is a man who must be destroyed!”

The Fountainhead concludes with a trial scene, one of the purest vessels for the artless unpacking of ideas in all of cinema. The prosecuting attorney sets the stage for this clash of clumsily articulated ideas when he asks the jury, “The issue which you are to decide is the crucial issue of our age: Has man any right to exist if he refuses to serve society?”

I’m no lawyer, but to me that seems like a much shakier strategy than simply asking the jury to consider whether or not Howard Roark blew up that housing project he confessed to blowing up. I’m not really sure why everyone in The Fountainhead seems to think, “Let’s all enslave our individual wills for the sake of serving society!” is such a surefire, irresistible rallying cry.

I re-watched The Fountainhead in anticipation of watching the Atlas Shrugged trilogy for an upcoming Exposition, and was once again blown away that a movie this staggeringly odd exists. On one level, The Fountainhead is a marvel: It’s absolutely gorgeous, an art-deco masterpiece of sophisticated production and costume design. Cooper and Neal are ideally cast and the film is genuinely sexy, albeit in a creepy, vaguely sadomasochistic fashion. Unlike the Atlas Shrugged movies, this feels like a genuine motion picture—which makes it all the more perverse. For while the characters look great and inhabit beautiful spaces, they never behave like anything resembling human beings, and The Fountainhead inhabits a world that looks nothing like ours, or the United States of 1949. It’s a singular attempt to use a sexy melodrama to deliver unfeasible and heavy-handed ideas.

So will audiences for Atlas Shrugged Part III: Who Is John Galt? also like The Fountainhead? It remains to be seen, but I can guarantee they’ll love Ellsworth Toohey. It’s impossible not to love that guy; he’s like Tom Hanks or Chris Pratt in that respect. So while the Atlas Shrugged trilogy may have concluded I’m hoping to use Kickstarter (just like the makers of Atlas Shrugged Part III!) to fund a Fountainhead spinoff focussing on the early years of Ellsworth Toohey. How did he get so snooty? Why does everyone love him so much? Why does he keep confessing to being evil and power-hungry? This prequel would explore all those issues. I think Rand would approve of my project. She seemed pretty chill about stuff like that.