The Theory Of Everything trailer begins hawking a major Oscar contender 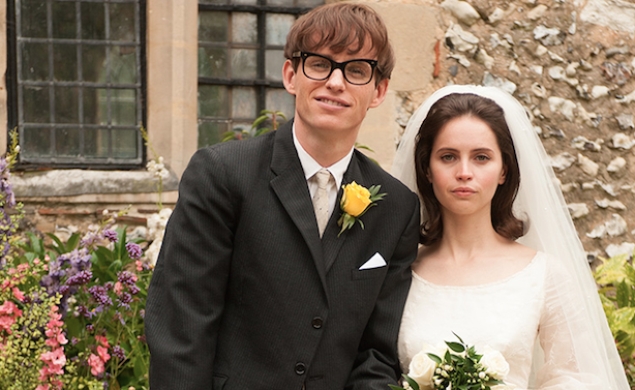 An early awards-season favorite, The Theory Of Everything adapts Travelling To Infinity; My Life With Stephen, a memoir of famed physicist and theoretician Stephen Hawking’s early years written by his ex-wife Jane. Though the Hawkings are no longer married, this is by all reports a fond, inspiring account of their life together, one sure to draw attention for the lead performances from Eddie Redmayne and Felicity Jones. On this day of many trailers, the film just released another one. And here it is:

The trail of the tape
Title: The Theory Of Everything
Director: James Marsh
Screenwriters: Anthony McCarten
Cast: Eddie Redmayne, Felicity Jones, Charlie Cox, Emily Watson, Simon McBurney, David Thewlis
Release date: November 7
Suggested alternate title: Stephen Explains It All
The entire trailer in one line of dialogue: “Why do you know that?”
The entire trailer in one screengrab:

The trailer plays up the uplift but director James Marsh has done plenty of nuanced work in the past, most famously in the documentaries Project Nim and Man On Wire. If some of that finds its way into The Theory Of Everything, this might turn out to be a memorable portrait of a unique mind. (Or, more accurately, another one.)