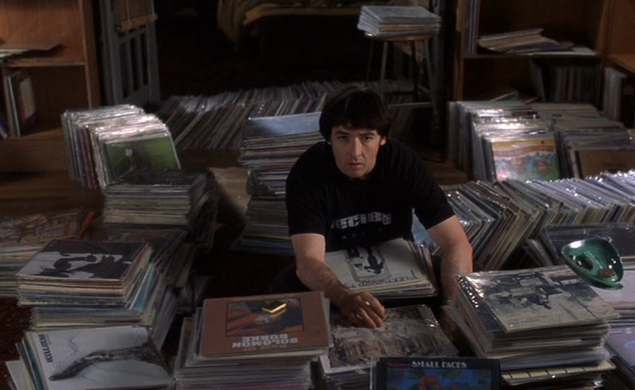 Recently featured in The Dissolve’s list of The Movies’ 50 Greatest Pop Music Moments (it was #11!), director Stephen Frears’ and co-writer/star John Cusack’s 2000 adaptation of Nick Hornby’s cult novel High Fidelity is partly about music, and partly about getting over cultish obsessions and learning to be a grown-up. Cusack plays Rob Gordon, a Chicago independent record store owner who obsessively makes lists of his personal Top Fives, from his favorite album-opening songs to the girls who broke his heart. The appeal of Hornby’s novel is in its digressions, which the film version translates by having Rob directly address the camera with his opinions, and with stories about his on-again/off-again relationship with Laura (played by Iben Hjejle), a woman he feels most passionate about when she’s not around any more. The love story in High Fidelity is the weakest part of the film (just as it was in the novel), but that’s largely because the real romance here is between Rob and his record store employees, played by the scene-stealing Jack Black and Todd Louiso. The truest, funniest parts of the movie are when the three of them try to one-up each other with their impeccably obscure musical tastes—like a living listicle. High Fidelity airs on Starz Comedy at 9:30 p.m. Eastern.