Knock-knock-knock, The Babadook trailer is coming for you 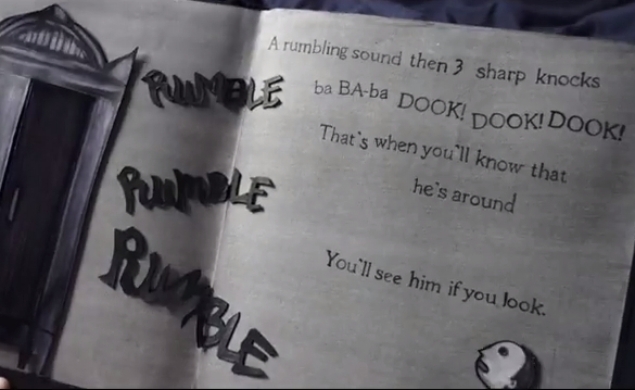 Jennifer Kent’s clever, creepy The Babadook wowed audiences at Sundance way back in January—our Noel Murray called it both “brilliant” and “absolutely terrifying”—and the twisted domestic horror film is finally ready to scare larger audiences when it hits theaters later this season. The film has plenty of familiar elements—a creaky house, a single woman, a unhinged kid, and a dark fairy tale,—but Kent combines them into something greater than the sum of its parts. The eponymous Babadook is the primary villain of young Sam’s (Noah Wiseman) favorite pop-up book, a fanged demon who starts seeping out into his everyday life with his beleaguered mom Amelia (Essie Davis). Once Sam starts behaving in increasingly odd and dangerous ways—like shoving apparent friends out of charming playhouses—Amelia is forced to confront the fact that something else might be going on, beyond just having a troubled kid. In short: Is the Babadook real or is Sam just going nuts? And which answer is more chilling? Take a look, and try not to cover your eyes:

Combining psychological horror, domestic drama, and one hell of a twisted fairy tale, The Babadook is a complete and complex feature that makes something as sweet and innocuous as reading your mop-topped spawn a bedtime story suddenly feel nefarious. Is the Babadook really coming to get Amelia and Sam, or is the pair simply tumbling headlong into a shared delusion that can’t be snuffed out by a charred storybook? Both possibilities pack their own nightmares, and the Babadook threatens to knock his way into yours.