The Speculometron: Will William Shatner cameo in Star Trek 3? 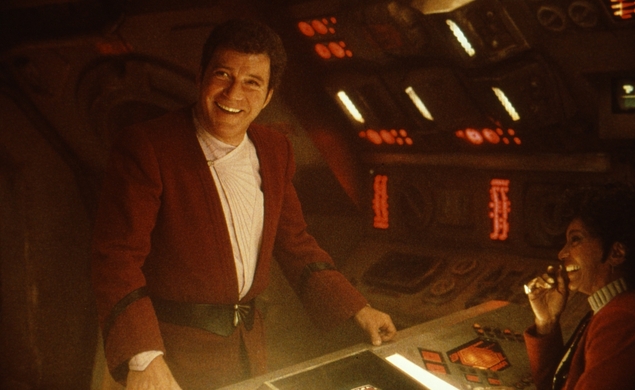 Evidence: “I have learned that the script for Star Trek 3 includes a scene that reteams Shatner and Nimoy onscreen as Kirk and Spock for the first time in canon since 1991’s Star Trek VI: The Undiscovered Country. It would be a pretty huge moment for fans of the franchise, and likely the last time we'll ever see Shatner as James T. Kirk in official continuity.”

The Speculometron’s calculations: A Shatner and Nimoy cameo is most logical. Star Trek 3 director Roberto Orci is a bigger Trekkie than his predecessor J.J. Abrams, and surely knows how meaningful it would be to fans to see the old duo together one last time. Both actors are getting up there in age (they’re both 83); if they were going to make one final appearance together as Kirk and Spock, this next Star Trek would be the time to do it.

But just because the time is right and the director is inclined to make it happen doesn’t mean Shatner will be as well. Although Nimoy appeared in both of the rebooted Star Treks, Shatner has been completely absent from the Abramsverse. As the story goes, Orci and former screenwriting partner Alex Kurtzman wrote a brief cameo for Shatner for the 2009 Star Trek that would have seen him appear in a sort of holographic greeting to Spock. But the scene was cut before production began, and the original Captain Kirk has never met Chris Pine the way Nimoy has hung out with Zachary Quinto. When he’s been asked about how he’s felt about the snub, Shatner’s expressed disappointment that could be interpreted as joking or sincerely hurt.

So the question for the Speculometron then becomes whether Shatner, who Badass Digest describes as “prickly,” might hold a grudge or not. Its calculations suggest that Shatner might show up for Star Trek 3—but only for the right part. A meaningless cameo like the one originally written for Star Trek 3 likely won’t do it; it would almost certainly need to be a meaty role with at least some kind of purpose beyond fan service. Badass claims the current plan for Shatner is “plot-driven and integral” to the movie as a whole. So it might happen. But if you’re really hoping to see Shatner and Nimoy again, you might want to raise the deflector shields on your heart right now just so you’re not too devastated if it doesn’t come to pass.