Streaming University: Is The Man Who Is Tall Happy? 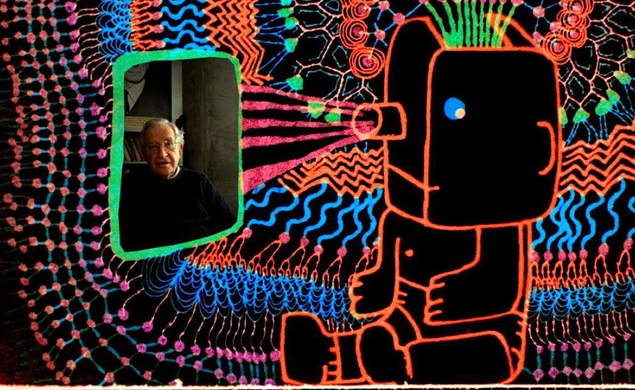 Film: Is The Man Who Is Tall Happy? (2013)
Director: Michel Gondry
Streaming On: Netflix
Primary Focus Of Study: The life and theories of Noam Chomsky
Secondary Focuses Of Study: Semantics, linguistics, problems in communication, inter-cultural miscommunication, whimsy, the life and ideas of Michael Gondry

Welcome to an unusually pure installment of Streaming University, as this time around we have an actual professor on hand in the form of  Noam Chomsky. (Or two, if you include Michel Gondry, who is a Professor Emeritus Of Whimsy at The Paris Institute Of Unicorns, Rainbows, And Cuckoo Clocks.) Is The Man Who Is Tall Happy? even begins with director, writer, animator, star, and animating spirit Gondry engaging in a Streaming University-like course of adult education by renting a pair of documentaries on Chomsky in an attempt to educate himself on the man’s life and work. But that’s not enough for Gondry, a man whose defining features  are his infinite curiosity and boundless sense of possibility, so he decides to meet the man himself for a series of conversations he then animates. The idea is to present the film not as any sort of objective reality (if such a thing even exists), but rather Gondry’s deeply subjective perception of his conversations with Chomsky.

One of the great strengths of animation, particularly of the charmingly handmade version on display here, is that it does not pretend to represent reality the way live-action documentary footage might. Animation is transparently fake, and in its own way more honest than a documentary that professes to reveal an objective reality, but manipulates that footage through camera placement, editing, and a million other directorial decisions. Animating the conversations serves another crucial purpose as well: It puts a charming, whimsical, and childlike spin on Chomsky’s endless droning, which can charitably be called incredibly boring. Gondry takes Chomsky out of the classroom and into the loopy world of Waking Life.

The two men are a study in opposites. Gondry is an eternal child, where Chomsky seems to have been born a dour, grey-haired old man. Gondry radiates infectious curiosity and enthusiasm, where Chomsky speaks with a tedious certainty even as he answers Gondry’s questions with further questions. His observations about language, science, and the way we process the world obfuscate more than than they educate.

Gondry makes the film partially about the making of the film, which could come off as self-indulgent in another context, but proves enormously winning here. He frets about wanting to finish the movie before Chomsky dies, cops to not understanding some of Chomsky’s ideas, obsesses about his own difficulties with the English language and the way that affects the way he processes the world, and discusses the animating process and how he simultaneously juggled editing The Green Hornet and working on his Chomsky film.

Gondry’s animation is Keith Haring-like in its simple expressiveness. They’re brain doodles filled with life, energy, and a sense of fun that animates Chomsky’s ideas and theories in more ways than one. Chomsky is a cold, grey, dry subject, but Gondry penetrates his emotional walls to get Chomsky to talk briefly about his late wife and the life they shared, and Chomsky’s early experiences with anti-semitism, a formative trauma that seems to have permanently affected how he sees the world. Gondry’s lovely animation transforms a lecture into an unexpected love story and creates a sense of romance. In these brief segments, we get a glimpse of the man behind those cerebral theories.