Short Cuts: “Paris Through Pentax,” a collaboration between two cameras 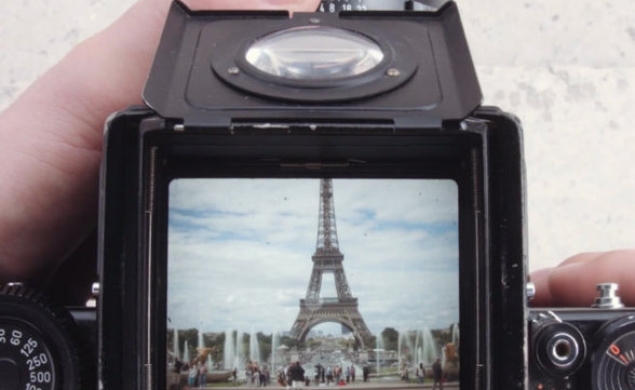 The other day I was sitting in a waiting room, killing time by cycling through my RSS, Twitter, and Facebook feeds, before settling in to a novel—all on my phone. It occurred to me that if I’d been reading a print newspaper, or writing letters to a friend, or holding a hardback book, most anyone who happened by would’ve looked on approvingly. Instead, I probably came across as just another distracted modern dude who can’t go 30 seconds without checking his phone.

Mathieu Maury and Antoine Pai’s short film “Paris Through Pentax” (made under the auspices of their advertising company, Maison Carnot) offers a different perspective on another common sight: the tourist taking in the wonders of the world through a viewfinder. At the website PetaPixel, Pai told the story of the film’s origins, writing, “Mathieu passed by my place with the Pentax 67 and almost the same day I received the Blackmagic pocket camera and it just seemed obvious to us when the two cameras were lying together on the table.” He adds, “As Parisians, we are so used to the charm of our city that we forget sometimes to take a minute and observe. Marcel Proust once said, ‘Mystery is not about traveling to new places but it’s about looking with new eyes.’ That is totally what we felt while shooting this film.”

But for me, what’s most touching about “Paris Through Pentax”—besides the sights of young and old people alike enjoying a magical city—is the way it recontextualizes the image of people with their head down, staring into a phone or a camera. Maury and Pai yoked the Blackmagic video camera to the Pentax, creating a POV shot of a photographer looking down into the Pentax’s view-screen. The pictures are fleeting—people eating in cafes, a couple kissing, the Eiffel tower, and so on—and each scene lasts only a couple of seconds, suggesting entire mini-movies of their own. The frame, however, never changes much. The edges of the screen in “Paris Through Pentax” confirm the worst stereotype of the technology-obsessed, showing the ground instead of what’s all around the subject. But there, in the middle of the screen, is Paris, looking lively and lovely, serving as a reminder to pay attention to what the device conveys, not to the device itself—or to the person wielding it.