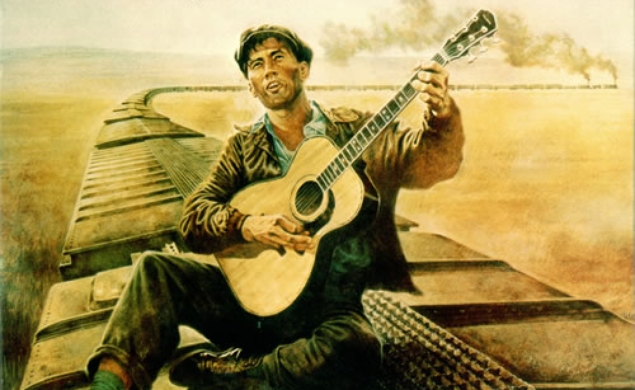 On Saturday night, Turner Classic Movies is showing a small slate of films about American folk and country music, including the Loretta Lynn biopic Coal Miner’s Daughter and the Hank Williams biopic Your Cheatin’ Heart. And in between those two, TCM has one of the best films of the 1970s: Hal Ashby’s Bound For Glory, starring David Carradine as traveling folksinger Woody Guthrie. Screenwriter Robert Getchell adapts Guthrie’s own memoir of working and performing during the Dust Bowl era—following Guthrie as he develops a vision of America at its best and worst that would continue to influence folk music for decades to come. Ashby and cinematographer Haskell Wexler (who won an Oscar for this film) give Guthrie’s story a cinematic flair, with lighting and camera moves befitting a golden age Hollywood epic, not an exploration of desperate poverty and hard labor. The result is a glorious celebration of American artist. It airs on Saturday at 10:15 p.m. Eastern.