Feedback: How gross is too gross? 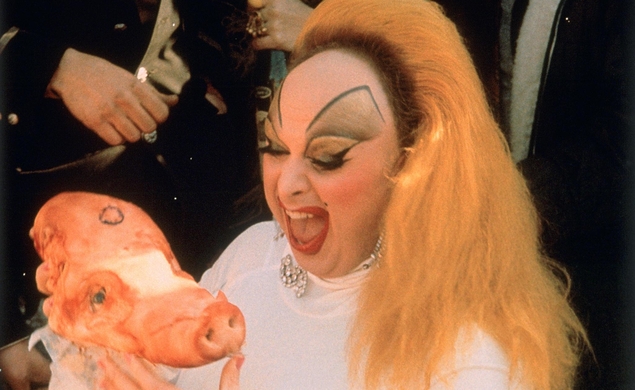 Tuesday was the unofficial gross-out day here at The Dissolve, with a John Waters interview and Scott Tobias’ review of Wetlands sparking a lot of discussion in the comments about what we do when even the description of an acclaimed movie makes us feel physically repulsed. The conversation spilled from article to article, but the juiciest exchange (so to speak) came in the Wetlands comments.

Elizabeth Lerner: “I usually try to muscle through those feelings if I think the film is of value in some way or another… But yeah, I’m never, ever, ever, ever, ever watching this ever. Proof that time travel is impossible is that me from the future didn’t come back and tell me not to learn about this in the first place.”

Ben Folds Fan IN 3D!!!: “Considering how I gagged really badly at the final scene from Pink Flamingos, and probably saved myself from vomiting by looking away at the screen, I just get a feeling that this film would be too much for me to take.”

washington: “I feel like I just went into Lerner's time machine? That still holds power?”

Ben Folds Fan IN 3D!!!: “Apparently, eating shit is just one of those things that can make me gag unaccountably. I’m not trying to say that it’s a universal thing, it’s just one of my particular hangups. Just because it’s over 40 years old doesn’t mean that what’s depicted doesn’t produce an automatic gag reflex for me.”

Ben Folds Fan IN 3D!!!: “I’m more fascinated by your fascination. I mean, I just figured that this was a subjective thing about what repulses you on a personal level. I didn’t realize that it’s blasé now to say that Pink Flamingos has the ability to make me gag. (Although, it really is just that last scene. Everything else, I’m totally fine by).”

washington: “Even the most squeamish people I know who would watch this sort of movie seem unfazed by that shot. (Oddly Female Trouble seems to get a few more eyebrows raised.) From that limited bubble I just assumed most people, especially the film literate such as yourself, sort of had grown past that, what with even von Trier going mainstream and respectable in recent years.”

Ben Folds Fan IN 3D!!!: “Even being film literate, I haven’t really seen too many films that deal with eating literal shit and, honestly, no matter how many films I see, I very much doubt I will ever be able to fully handle this. Now, I’m not actively avoiding John Waters’ films because of this and I actually really enjoyed it tremendously. Just had to note that that particular scene really made me sick. (Speaking of von Trier, I also haven’t see Antichrist and the genital mutilation scene is making it very hard for me to want to see this. … Full on massacring of a man’s genitalia would be a bit much for me to take.”

Persia: “The self-harm is actually my nope for Antichrist.”

Conor Malcolm Crockford: “I can deal with poop and asses just fine but thanks for bringing that up. Something about a man’s balls being messed with makes me queasy. (Similarly, I cringed hard at Mason Verger’s cutting his own face off on Hannibal.)”

Dude The Obscure: “I’ve recently seen Antichrist, Nymphomaniac and Irreversible. The von Trier films I’ve found to be much easier to stomach than Noé's film. I’ve been wandering why and I think it has something to do with how grotesque the set-up is. I don’t see the things in these von Trier films happening in real life, but find the Noé scenario to be unnervingly plausible.”

I went through a phase in my late 20s when I was having anxiety attacks accompanied by bouts of nausea and dizziness, and during those years even the sound of somebody vomiting onscreen was enough to turn my stomach and send me scurrying up the aisles. (My poor wife just had to wait it out in the theater, assuming that eventually my stomach would settle down and I’d come back to my seat.) Having kids changed all that. Something about sticking my hands in the various forms of goo that their little bodies emitted cured me of any of my prior squeamish feelings about movie-puke. Now, I can’t think of much of anything that I’d find too disgusting to watch, provided that I knew the film was worth the trouble. (Though I’m not crazy about excessive farting.)

You guys raise an interesting question though, about whether realism plays a factor in how gross a gross-out scene is. I’d actually argue the opposite. The shit-eating in Pink Flamingos makes me wince, but in a weird way it’s so real that there’s a demystification factor. (“Oh, so that’s what it looks like when someone eats dogshit.”) It’s when a movie accentuates the grotesquerie through sound effects, props, and camera angles that I feel that old gag reflex kick back in again. It’s when a filmmaker plays up the idea of shit-eating that the scene becomes too much to take.

What do we do with these movies that make us ill, though? Usually I’m in favor of any film that can provoke a response, because too many films are content with being bland and inoffensive. But nausea is a physical sensation that’s unpleasant in a different way than, say, fear or outrage. Those feelings can be cathartic. Queasiness lingers. What I’m saying is that the movie had better be damn good if it’s going to make me feel that way.