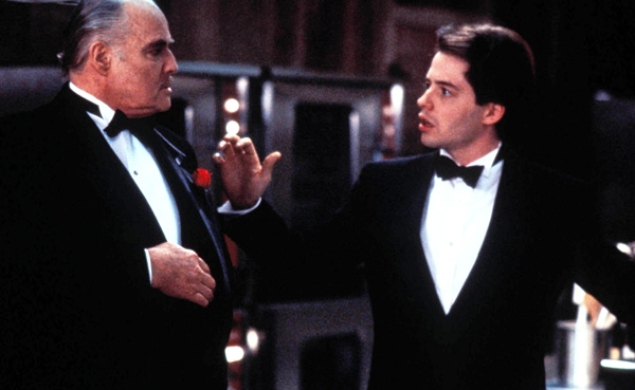 Toward the end of his career (and life), Marlon Brando became something of a laughingstock, mocked for his obesity, his occasional rambling talk-show appearances, and his bizarre late-period movies like The Island Of Dr. Moreau. But every now and then over his last decade-plus, Brando showed that he could still be Brando. I’d rank Brando’s performance in writer-director Andrew Bergman’s 1990 comedy The Freshman as one of his five best (up there with A Streetcar Named Desire, On The Waterfront, Last Tango In Paris, and The Godfather). In The Freshman, Brando plays a knowing riff on The Godfather’s Vito Corleone: a soft-spoken Italian-American “businessman” who befriends and employs an NYU film student played by Matthew Broderick. In later years, Brando’s instincts for what would be interesting on screen led him into some weird areas, but in The Freshman he’s playful without being outright strange; and Bergman makes good use of the contrast between the imposing, dapper Brando and the slobby milieu of  college kids. The twisty low-stakes plot, and some colorful character performances by the likes of Bruno Kirby and Penelope Ann Miller, make The Freshman easy to like, but it’s Brando who makes it feel like more than just a trifle. The Freshman airs on HDNet Movies tonight at 6:15 p.m. Eastern, and again at 10.