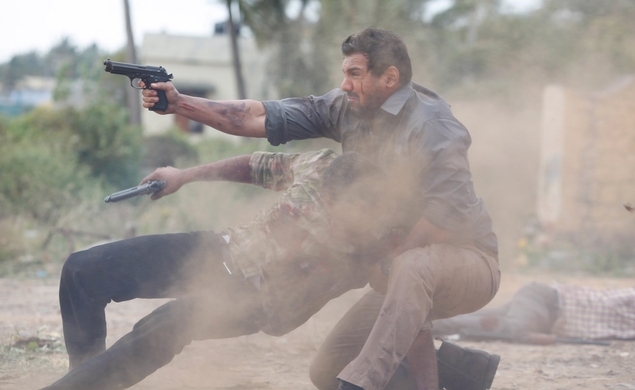 Madras Café is director Shoojit Sircar’s third feature, and by far his most controversial, making headlines for its de facto ban in the Indian state of Tamil Nadu. The film’s based based more or less directly on the 1991 assassination of Indian Prime Minister Rajiv Gandhi at the hands of the Liberation Tigers of Tamil Eelam (LTTE). This explanation of what happened is itself controversial and not universally accepted, for reasons far too complex to compress into a brief space. Suffice to say Gandhi’s death was just one incident in a 26-year Sri Lankan civil war pitting the majority Sinhalese population against the minority Tamils, killing approximately 100,000 (largely Tamil civilians).

It took Sircar seven years to pull the film together, starting with an 18-month research period that involved reviewing 10,000+ pages of court documents and related materials. Madras Café begins with a disclaimer that it’s fiction, and Sircar’s been insistent upon this point in interviews. Speaking to the BBC, he conceded that his film’s rebel leader bore a strong physical resemblance to LTTE founder Vellupillai Prabhakaran, and the actor playing an assassinated prime minister looks like Gandhi. Nonetheless, he claims the resemblance is “coincidental.”

The film’s recreation of the assassination has drawn Tamil ire, especially in the Indian state of Tamil Nadu. Though Sircar swears the film’s in no way anti-Tamil, that didn’t pacify groups in the state. “The aim of the movie is to portray Prabhakaran as a villain,” said Naam Tamizar Katchi, leader of the Tamil group Seeman. “We cannot accept the film in any form.” A petition to ban Madras Café’s release was filed with the high court of Chennai, Tamil Nadu’s capital, but rejected. Sircar arranged a screening in Tamil Nadu to win over protesters but failed to convince viewers of his film’s lack of anti-Tamil bias.

Prior to the film’s release today, protests were legion, as in a Wednesday demonstration by students of a city law college in Tamil Nadu. There were problems further afield, like in Sion (a locality in Mumbai), where an angry group set a gigantic poster for the film on fire. In total, more than 50 student protesters were arrested in Mumbai yesterday. With the potential for mass protests and violence in mind, it’s no surprise that the film probably won’t be screening in Tamil Nadu despite being cleared for release.

“We fear releasing the film might aggravate the ongoing protests,” one anonymous multiplex manager explained. “We don't want to risk it and, moreover, the decision to screen the film lies with each theatre.” Undeterred by the controversy, star/producer John Abraham says Sri Lankan distributors are interested, and he hopes to take Madras Café directly to that country soon.