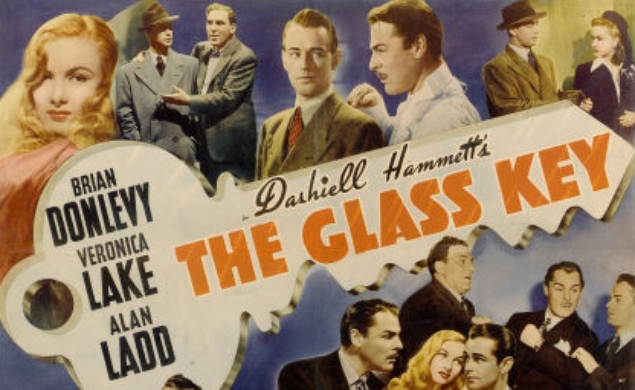 We began the week the 1944 Raymond Chandler adaptation Murder, My Sweet, so let’s end with another early noir: the 1942 adaptation of Dashiell Hammett’s The Glass Key. Fans of the Coen brothers may know The Glass Key as one of the inspirations for Miller’s Crossing. Both are stories about how a mobster’s right hand man tries to convince his boss that a woman is playing him for a sucker. In director Stuart Heisler and screenwriter Jonathan Latimer’s movie of The Glass Key, Alan Ladd plays the savvy lackey, while Veronica Lake plays the woman who’s all wrong for the boss—because she and the lackey are secretly into each other. There’s a sophistication to The Glass Key that sets it apart from later, pulpier noirs. It’s set in a complex urban environment, where politicians, policemen, and gangsters intermingle; and while director Stuart Heisler and screenwriter Jonathan Latimer smooth out a lot of Hammett’s kinks and wrinkles, the movie as a whole still packs a lot into its 85 minutes. It’ll be airing on Turner Classic Movies at 12:45 p.m. Eastern on Sunday.