Source Material: The illicit romance in The Last Of Robin Hood played out on the set of Cuban Rebel Girls 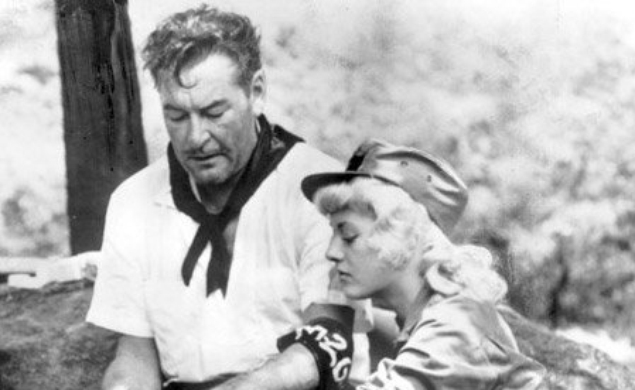 The new indie drama The Last Of Robin Hood has Kevin Kline playing the roguish actor Errol Flynn, toward the end of Flynn’s life, when he was all but unemployable in Hollywood after enduring one scandal after another. One of those scandals involved Flynn’s love affair with Beverly Aadland (played by Dakota Fanning in The Last Of Robin Hood), whom he met when she was 15 years old, and then cast in his final film, 1959’s Cuban Rebel Girls. Much of what really happened between Flynn and Aadland has been the subject of gossip-sheets and tell-all books; for those with an interest in that kind of Confidential fodder, it’s possible to scrutinize Flynn and Aadland’s relationship without watching the Kline/Fanning version, because Cuban Rebel Girls is still in circulation.

Cuban Rebel Girls (also known as Assault Of The Rebel Girls) would be a historically significant movie even if it didn’t offer a pictorial record of the Flynn/Aadland affair. The film was shot in Cuba, shortly after Fidel Castro came to power, and it was written and narrated by Flynn, who backed Castro’s cause. Flynn died before Cuban Rebel Girls was released, and didn’t live long enough to see his support of Cuba become controversial—which makes this movie something of an anomaly, as a light entertainment on the opposite side of nearly every Hollywood movie about Cuba that followed.

Made on the cheap, repurposing footage that Flynn and his producer friend Victor Pahlens had shot for a documentary about the revolution, Cuban Rebel Girls is mostly a hilariously stiff Z-movie, padded out with Flynn’s florid narration. Then around the 31st minute, Flynn, playing a reporter, stumbles across Aadland, playing an American who’s come to Cuba to help her boyfriend fight alongside Castro. The two share some awkward conversation about her lost shoe, and then he throws her over his horse and carries her back to the rebel camp in the mountains where she and her girlfriends are living. The scene gives a good idea of how Flynn saw Aadland—as does a later scene where she tries to cuddle up with her boyfriend and gets annoyed that his hand grenades are in the way. She’s not depicted as someone surprisingly mature for her age; she’s meant to be a naive little girl who needs to be taught what “liberty” really means. (By the way, for those only interested in Flynn and Aadland together, their other scene together arrives around minute 59.)

The ads for Cuban Rebel Girls back in 1959 referred to Aadland as Flynn’s “protégé,” which was a tasteful way of advertising the scandal (which, let’s face it, would’ve been the only reason most people would’ve wanted to see this movie when it originally came out). Flynn’s protégé doesn’t make her mentor look that good, though. She’s an awful actress, who plays her character as though she were a high-school cheerleader getting the star quarterback ready for the big game. But then that’s all part of the surreal nature of Cuban Rebel Girls, a movie that opens with an onscreen crawl offering “our thanks to the new army of Cuba,” and goes on to include several scenes where the other rebel girls lament that the people of Cuba aren’t as committed to fighting as these helpful Americans. The movie exists in a weird world where the whims of a drunken, dying Flynn are all justified—be it fomenting revolution, or sleeping with a teenager.