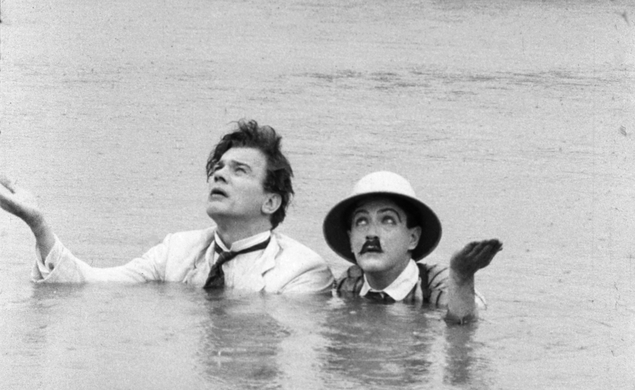 Almost exactly one year ago, we passed along an item about a long-lost, unfinished Orson Welles film that had been found and restored, and was then in the process of being prepared for exhibition. The film—or trio of short films, more accurately—was originally intended for a 1938 Mercury Theatre stage production of the late 19th century farce Too Much Johnson, written by actor/producer William Gillette. In keeping with the Mercury Theatre’s reputation for innovation, Welles slashed Gillette’s story of a reckless womanizer down considerably, to make more time for these films: three curtain-risers, meant to be shown before each of the show’s three acts. The footage found in an Italian warehouse (restored by the George Eastman House in collaboration with the Cineteca Del Friuli and Cinemazero, with a grant from the National Film Preservation Foundation) runs for over an hour, but Welles was reportedly planning to trim that down. Instead, he dropped the films when Too Much Johnson had an out-of-town tryout in Connecticut—perhaps because he ran out of time, perhaps because the theater couldn’t handle a projector, or perhaps because Mercury didn’t have the rights to make a film of Gillette’s play—and when the film-less staging flopped, Welles abandoned Too Much Johnson altogether.

The hourlong work-print of Welles’ Too Much Johnson films has had a few public screenings since the announcement of its rediscovery and restoration last year. And as of today—literally, as of just a few hours ago—Too Much Johnson is being made available for free streaming and download at the National Film Preservation Foundation website. The fully restored 66-minute work print can be found here, while an attempt to cut the footage into a shorter form more like what Welles might’ve intended can be found here. (The films are also available in HD on Fandor, which is helping to sponsor the NFPF’s online release of Too Much Johnson.) Both versions of Too Much Johnson are accompanied by extensive notes penned by UC-Davis English professor and early cinema scholar Scott Simmon, who explains more about the history of Welles’ project and how these films would’ve worked on-stage in conjunction with the Mercury Theatre’s streamlined version of Gillette’s play.

It might seem counterintuitive, but I recommend starting with the 34-minute edited version of Too Much Johnson. Though it’s only a guess at how Welles might’ve cut the film down, as Simmon (who’s also the editor) puts it, “It strives to be an educated one, informed by research into the unpublished play scripts left behind by Welles and the Mercury Theatre company.” The essence of what Welles was striving for is in the shorter film, minus a lot of the repetition and seams. (And it’s important to note that a lot of the footage on the work-print was edited by Welles, so all the crazy montages and other seemingly strange beats in the cut-down version come directly from the source.)

As for what you’ll find when you click through and watch Too Much Johnson—well, it’s an experiment, to be sure. Welles biographer Simon Callow has suggested that working on these films is what first got the theater-bound Welles excited about the idea of motion-picture editing, and the freeness with which Welles tosses images together is fun to watch, even as it sometimes lacks narrative coherence. Even more fun is how Welles uses all of the movie frame, recognizing that there was no reason to insert cinema into a stage production unless film could do something that that live theater couldn’t. As the womanizer (played by Welles’ go-to Mercury star Joseph Cotten) flees a jealous husband (Edgar Barrier) through the streets, alleys, and rooftops of New York, Welles plays with perspectives, putting characters in the extreme foreground or the deep background, for good comic effect.

Welles had comedy on his mind when he made these films. The shorts were partly an homage to the silent slapstick of Mack Sennett, which—when coupled with Welles’ decision to revive a dated farce—is an early example of the layered nostalgia that he’d later bring to films like Citizen Kane and The Magnificent Ambersons. But Welles goes for more than just gags during the long Cotten/Barrier chase sequence (which makes up about half the 34-minute cut). Welles puts his actors in precarious positions, edging along eaves and scurrying up wobbly ladders, and he seems to enjoy the geometric patterns they make when they’re criss-crossing paths on a fire escape. There’s a real, “I bet this’ll look good!” quality to what Welles shoots in the chase, proving that even though he was already an erudite aesthete when he made Too Much Johnson, he was also a guy in his early 20s. Or to put it another way: Welles and Cotten were doing Jackass 60 years before Jackass. (And yes, that juvenilia extends to the title of Too Much Johnson, which is believed to have been a double-entendre even in Gillette’s day.)

Is Too Much Johnson obviously the work of the man who’d make Citizen Kane a few years later? No. It’s very raw, and full of good ideas that could’ve used a little more refinement. (A climactic cliff-top duel shot from a vantage point far below is an especially daring sequence, even if Welles doesn’t appear to know where to go with it.) But these aren’t home movies, either. Too Much Johnson is both silly and ambitious, and an unexpected treat given how long this footage was out of circulation. Major thanks—and perhaps a generous donation—are due to the NFPF from film buffs.