The Dissolve on... our favorite movie books from our formative years 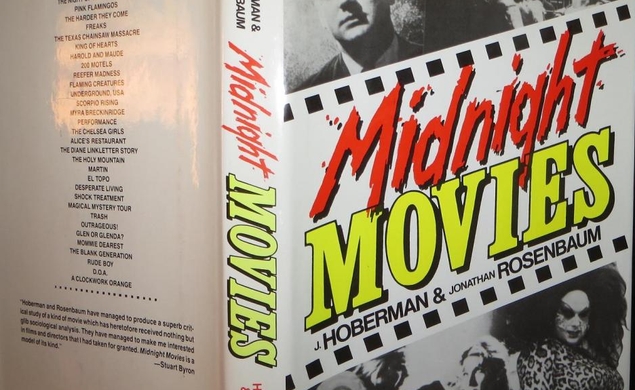 The news that the 2015 edition of Leonard Maltin’s Movie Guide will be its last got the staff of The Dissolve reflecting on the books, like the Maltin Guide, that they loved in their younger days. In tribute to Maltin’s annual institution, each writer picked a book that opened their eyes to the wider world of film, either as a teenager or a twentysomething, and helped push them towards their chosen profession. In alphabetical order, their picks:

A Cinema Of Loneliness by Robert Philip Kolker: The first college film class I took was actually a sociology class—“Sociology In Film”—and because my professor wanted us to write more about sociology than cinema, I didn’t get good grades. I loved that class, though. We watched great movies (I remember good discussions of Blue Collar and Hannah And Her Sisters in particular), and the teacher assigned us this book, which I devoured, and have returned to often in the decades since. Kolker focuses on five distinctive American filmmakers of the 1960s and 1970s: Robert Altman, Francis Ford Coppola, Stanley Kubrick, Arthur Penn, and Martin Scorsese. (A later edition swaps in Steven Spielberg for Coppola, and updates to include films from the 1980s.) In addition to analyzing the directors’ films in the context of an America affected by assassinations, Vietnam, generation gaps, and Watergate, Kolker offers some strong insights into the actual filmmaking, and some well-argued opinions—with which I often disagreed. I read Kolker before I ever read any Pauline Kael, so this book was my introduction to trends in critical thought about The New Hollywood. I had a similar reaction to it that I had when I read Greil Marcus’ Mystery Train in high school: It made me want to watch every movie I could find by these directors, and it helped me take them seriously when I did. —Noel Murray

Harlan Ellison’s Watching by Harlan Ellison: I grew up reading movie reviews in the Washington Star (RIP) and The Washington Post, which tended toward terseness—like all old-media outlets, they had limited space, so while the latest Oscar-baiting mega-release might merit 20 column inches, most films only got 500 words or so. Which was good for learning concision, but not so much for expansion. I first encountered Harlan Ellison through his fiction, but quickly fell into his critical work and books of essays, in which he had pages upon pages to talk about films—not just to describe the plot and say “This actor was good, this one was bad,” but to get into the philosophy of films and film-watching, to explore his own boyhood cinema fandom and the value of escapism, to analyze what makes a hit and what makes a flop, to champion films that failed at the box office, and so forth. The passion he puts into his writing is particularly compelling: He isn’t a clock-puncher churning out six column inches for the evening edition, he’s gushing forward in vast detail about something he feels intensely about. I wouldn’t try to match his grandiloquence, but his vocabulary, his fearlessness, and above all his ability to write about a film in a way that brings in larger issues, that understands context, and that makes criticism more about societal and artistic analysis than a binary good/bad consumer report—those were all immensely influential for me. In a pre-Internet, pre-home video era, when it was immensely difficult to see films once they’d left theaters, reading Ellison’s detailed, thoughtful reviews of a film were often the next best thing to watching them. —Tasha Robinson

Leonard Maltin’s Movie Guide by Leonard Maltin: Like many of my colleagues, I grew up on Leonard Maltin. His movie guides were a lonely kid’s bible. I would read and re-read them compulsively, imagining what all of the movies in the guides would look and feel like and fantasizing about a moment when I would be able to see them, particularly the R-rated ones. Maltin jsn't an incendiary, provocative genius like Pauline Kael, who set out to change the way people saw movies, or a guy like Roger Ebert, whose insights and depth could make you cry; he's more like a friendly uncle whose consummate professionalism and warmth makes his guides feel comfy and inviting, like cinematic/literary comfort food. Maltin’s Movie Guides don't have much space to devote to any individual entry, but at best, a Maltin review has a haiku-like succinctness that makes the most of the limited space allotted for any movie, whether it was C.H.U.D II: Bud The Chud or Citizen Kane II: Bud The Chud. So while I’m glad there are plenty of Movie Guides in circulation, I mourn that no new volumes will be forthcoming. —Nathan Rabin

Midnight Movies by J. Hoberman & Jonathan Rosenbaum: Maltin’s Movie Guide was my go-to reference as a young film enthusiast to the point where I used to tape and watch any movie that aired on TV that got three-and-a-half or four-stars and compile them on videotapes I labeled “Masters Of Cinema.” (Maybe I should ask these guys for some money?) Given the way UHF stations would edit movies, this made for some painful first exposures to classic films, particularly a showing of Nashville stretched out over four hours, compressed to a TV-friendly aspect ratio, and shredded to the point of incomprehensibility. But since we’ve talked about Maltin plenty already, here's a great one I found a little later on. First published in 1983, Midnight Movies surveys the field of midnight film culture at its height, just before the arrival of home video was about to push it further to the margins. Discussing Eraserhead, Night Of The Living Dead, the work of John Waters and others, it’s an invaluable and insightful look at cult film culture in its late-’60s and 1970s heyday. Rosenbaum and Hoberman offer smart readings of the films, but also provide a background into the conditions that led to their ascent, as well as who watched them and where. The chapter on The Rocky Horror Picture Show, for instance, deftly blends criticism with cultural history. The scene itself has changed as midnight movies retreated to only the largest cities, adopted new cult objects and shed others, but Midnight Movies remains an invaluable, inspiring book. —Keith Phipps

Questions For The Movie Answer Man by Roger Ebert: As I wrote yesterday, I too spent a lot of my childhood studying Leonard Maltin’s Movie Guide in painfully nerdy detail. And I really loved Hitchcock, the book-length interview of the Master Of Suspense by Francois Truffaut, which I bought the summer after my junior year of high school and read from cover to cover as I watched most of Hitchcock’s work for the first time. But even at that age, my bookshelf was already filled with volumes by Roger Ebert and in that period, my favorite was always Questions For The Movie Answer Man, a compilation of Ebert’s biweekly Chicago Sun-Times column answering reader mail. As a teenager just starting to discover film criticism, I was drawn to QFTMAM’s conversational style, and the way Ebert so effortlessly bounced back and forth from serious analysis to trivia to sarcastic quips, often on the same page, and sometimes even in the same response. Like so much of Ebert's work, it made film crit seem simultaneously accessible and illuminating. I was always disappointed he never edited a follow-up volume, though you can find the original Movie Answer Man columns archived on his website. —Matt Singer