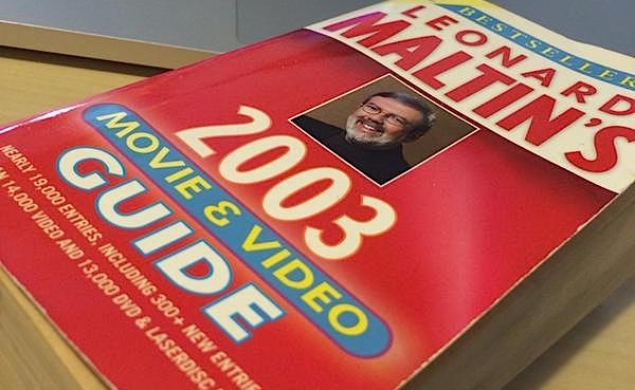 Before the year 2000 or so, there was one book you could expect to find on almost every single American movie lover’s bookshelf: Leonard Maltin’s Movie Guide. Founded by Maltin in the late 1960s as TV Movies (as in, a reference book about the movies that aired on television), the volume, which was updated annually for more than 25 years, became an invaluable resource in the pre-Internet age. In recent years, Maltin’s Movie Guide spawned its own smartphone app and a popular game on the Doug Loves Movies podcast, and it’s remained a useful book, but according to Joe Leydon, a Movie Guide contributor since 2009, the upcoming 2015 edition will be the series’ last. Leydon quotes from Maltin’s own foreward for an explanation:

“With ready access to information on the Internet, our readership has diminished at an alarming rate. The book’s loyal followers know that we strive to offer something one can’t easily find online: curated information that is accurate and user-friendly, along with our own reviews and ratings. But when a growing number of people believe that everything should be free, it’s impossible to support a reference book that requires a staff of contributors and editors.”

The copy of Maltin’s Movie Guide I keep on the shelf in my office (that’s it there in the photo above) lists 13 contributors and editors, which gives you a sense of the enormity of the Movie Guide project and the difficulty of keeping it profitable. But back in the days before the IMDb was just a click away, Maltin’s volume was a crucial part of any movie library. When you were 12 years old, and you held the Movie Guide in your hands, it felt like the entire world of cinema was at your fingertips.

As one of those 12-year-olds, I have many fond memories of endless hours spent pouring over the Movie Guide. For me, it wasn’t just a place to turn when a strange movie popped up on cable. When I was bored, I would open it up to a random page and just start reading. (Can you believe I didn’t have a girlfriend until I was almost 18? I know; it’s crazy.) Though its capsule reviews were short, they were full of clever and insightful writing. Every page had something great to discover. I’ve just opened my copy to page 599, where I find a hilarious zero-star review of Hellraiser: Bloodline:

“In this outing, Pinhead matches wits with a demon lover/co-hort ironically named Angelique. Dull and plot-heavy, even if you’re a Clive Barker devotee. Re-caulk your bathtub instead. But then, what did you expect of another film from the Smithee oeuvre?”

Maltin’s Movie Guide was the first place I learned about Alan Smithee, and old Hollywood franchises like The Thin Man and Dr. Kildare, which received their own miniature histories. It wasn’t the most exhaustive source on any one subject, but it was a great introduction to a million different subjects, and I’m sure I speak for many cinephiles of my age when I say this book is directly responsible for expanding my knowledge of film as a young person. Stranded in suburbia without a ton of movie-loving friends, I would have been lost.

I’ve owned three or four Movie Guides through the years; when one became too tattered from overuse, I’d throw it away and buy the newest volume. (The one I bought around 1996 literally fell apart.) I haven’t bought one in a few years for the same reason the book’s sales have fallen; thanks to the Internet, I have unlimited access to cinematic reference materials anywhere and anytime. But my current copy of Maltin’s Movie Guide is looking pretty ragged (and I dog-eared the page with the review of Scanners II: The New Order for some reason), so I’ll be buying the 2015 Movie Guide when it comes out on September 2. It’s still a great book to have around.