Wait, Edge Of Tomorrow has become Live. Die. Repeat. all of a sudden? 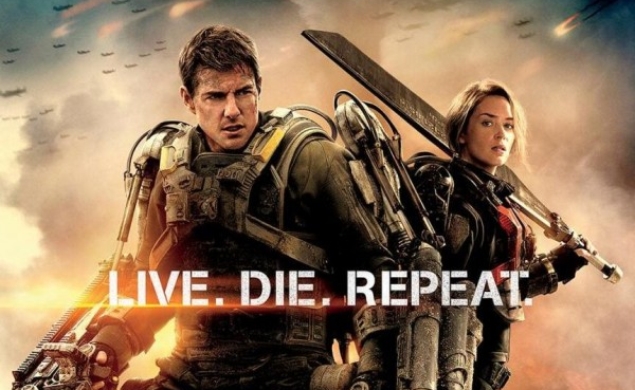 Back in March, we put together a list of recent and upcoming movies (like John Carter, and Home) that had changed their titles from something interesting and distinctive (like John Carter Of Mars, and The True Meaning Of Smekday). One of the movies we mentioned in that list was Edge Of Tomorrow, which is based on a book called All You Need Is Kill, but ditched that more unusual name for a title that is both completely unmemorable and largely unrelated to what the story’s actually about. Edge Of Tomorrow is set in the future, which is technically “tomorrow,” and the plot does involve a character not wanting to wake up into a new day, which makes the idea of an “edge of tomorrow” relevant. But given that the premise of the movie is that a self-serving, cowardly military stooge (played by Tom Cruise) has to die over and over until he learn how to thwart an alien invasion, the current title evokes nothing of what makes the story exciting.

Although perhaps I shouldn’t use the word “current.” Because if Edge Of Tomorrow has taught us anything, it’s that sometimes the universe grants us multiple opportunities to fix a mistake. As several people noticed yesterday—including Dissolve contributor Sam Adams—the DVD and Blu-ray packaging for Edge Of Tomorrow squeezes that title down to the bottom of the cover, and emblazons the words “Live. Die. Repeat.” on the front and on the spine. (The Film Stage Twitter feed pointed out that the iTunes store actually lists the movie as Live Die Repeat: Edge Of Tomorrow.)

Warner Bros. hasn’t officially commented on the rebranding—not even for the item that the venerable Hollywood trade publication Variety put up yesterday. For what it’s worth, the press release I got from Warner Bros. about the October 7th DVD/Blu-ray/VOD street-date calls the movie “Edge Of Tomorrow” in the subject line of the e-mail and all the way through the text, although the phrase “Live. Die. Repeat.” does appear twice. So this may be more of an unofficial title change than an unofficial one.

Still, Live. Die. Repeat. is so much cooler a name even than All You Need Is Kill. Too bad Warner Bros. can’t just wake up back in June and release the film with the title it should’ve had all along.