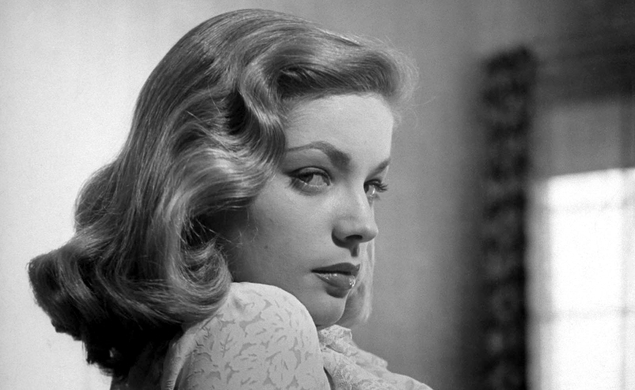 A lot of what made Lauren Bacall into the “Lauren Bacall” that audiences fell in love with in the 1940s was the result of happy accidents. Bacall was a teenage fashion model when Howard Hawks’ wife Nancy found her picture in a magazine, and recommended Bacall to her husband for the romantic lead in To Have And Have Not. To cover her nerves, Bacall lowered her face and fell back on her training in poise and etiquette, which—when combined with Jules Furthmann and William Faulkner’s off-kilter dialogue, and positioned opposite a typically earthy Humphrey Bogart performance—established Bacall’s screen presence as a deep-voiced, refined, playful partner to one of Hollywood’s most powerful leading men. In 1944, there was no one quite like Bacall, who came across like a younger, more sensuous version of Bette Davis and Barbara Stanwyck. As soon as she walked into Bogie’s room in To Have And Have Not and asked, “Anybody got a match?”—while leaning cockily against the doorframe—Bacall was already a star.

Lauren Bacall died today, at the age of 89, and with her passing, a little bit more of Hollywood’s institutional memory disappears. Alongside Bogart—as a co-star and as a wife—Bacall was Hollywood royalty in the 1940s and 1950s, socializing with other big stars and rallying the community around leftist political causes. Bacall was accepted into the club right away, even though she was a decade or more younger than the era’s A-listers. While other actors her age were studying at The Actors Studio, Bacall was reveling in the last vestiges of Golden Age glamour, wearing stylish clothes and enjoying being a new model of femininity for the 1950s. And it was because she was so young that she outlived so many of her friends, and was able to tell their stories after they were gone.

After Bogart died in 1957, Bacall worked less, settling into a new phase of her career as a character actress and celebrity raconteur. Bacall could always be counted on to charm a talk show host or a documentary filmmaker with anecdotes about Bogie, or Hawks, or John Huston, or her close pal Katharine Hepburn. And Bacall made some adventurous choices as an actress, once she stepped away from leading roles. She worked with Robert Altman and Lars von Trier (both twice), and was always willing to take small parts in interesting films like Misery or Birth (or even as the voice of a witch in Howl’s Moving Castle).

But Bacall’s legacy will be the run of performances she gave between 1944 and 1957—and in particular the four movies she made with Humphrey Bogart. In To Have And Have Not, The Big Sleep, Dark Passage, and Key Largo, Bacall smoked, sang, seduced, and matched Bogart quip for quip and innuendo for innuendo. She looked up through her eyelids, and compelled audiences to look right back. It was impossible not to.