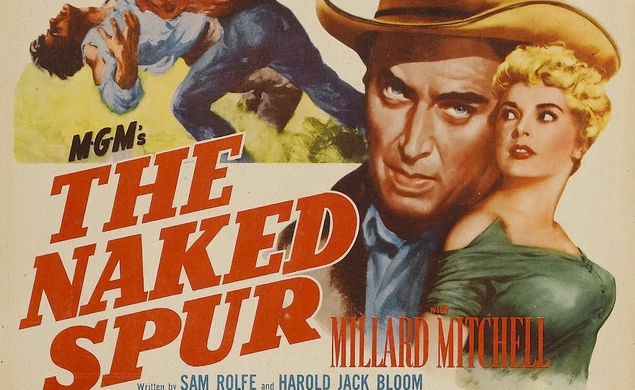 Last week, The Dissolve staff made a list of directors we’d love to see get a career-spanning box set, and Keith lobbied for a box of Anthony Mann’s westerns, which made me happy, because I almost made that exact choice myself. (I went with Frederick Wiseman instead, though after the piece ran I realized that I should’ve called for a set of Orson Welles’ odds and ends, which is something I’ve been dreaming about for decades.) Tonight, Turner Classic Movies is showing what may be the best of the westerns that Mann made with James Stewart: 1953’s The Naked Spur, starring Stewart as a rancher-turned-bounty-hunter who tries to capture an outlaw (Robert Ryan) to earn the money to buy back his land. The plot is stripped to its elements: just the bounty hunter, the outlaw, the few conflicted members of their traveling party, and the dangerous, forbidding territory they all need to cross. Mann and his screenwriters fill in more of the characters’ pasts at each stop, always a result of something that’s just happened to them (as opposed to the desperate, backstory-padding chitchat of too many modern movies), making The Naked Spur become both richer and more exciting as it goes along. And Stewart does what he does in so many of his Mann collaborations: play a decent man who’s been pushed by circumstance to compromise his principles. The Naked Spur airs on TCM at 8 p.m. Eastern as part of a whole day of Stewart films—very few of which get as dark as this movie does at times.