Our next Movie Of The Week: Brian De Palma’s Phantom Of The Paradise 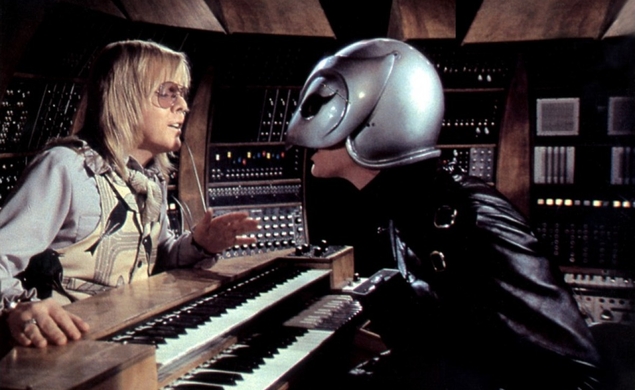 Director Brian De Palma began his career with a string of scathingly satirical New York comedies and art projects before plunging headfirst into the genre that would define him, making the violent, stylish 1973 suspense film Sisters. De Palma followed that up with his most audacious film of the 1970s—one that wove together the pointed social commentary of his early movies with the trappings of a thriller, and bound it all together with music. Phantom Of The Paradise stars William Finley as Winslow Leach, an aspiring songwriter who makes the mistake of pitching his music to the rock ’n’ roll impresario known as Swan (played by 1970s soft-pop legend Paul Williams, who also wrote the movie’s songs). Swan steals Winslow’s cantata—based on the legend of Faust—intending to give it to one of his many novelty acts to perform at his new theater, The Paradise. But a scarred, masked Winslow works behind the scenes to make sure that his true love, Phoenix (Jessica Harper), sings the songs he wrote for her. A pastiche of cultural influences and references, Phantom Of The Paradise is a smart, funny, and surprisingly affecting commentary on how artists get exploited and destroyed by businessmen.

The Dissolve staff is populated by several rabid De Palma fans, who’ll be convening for our Movie Of The Week Forum next Wednesday to discuss what De Palma had to say about art and commerce circa 1974, and how he said it in the language of some of the great expressionist filmmakers of the 20th century. Prior to Wednesday’s Forum, I’ll be writing Tuesday’s Keynote essay about how De Palma uses split screens and layered action in Phantom Of The Paradise to suggest that there’s more going on in the film than just a broad spoof. And then on Thursday, Alan Jones will look into a how a movie that bombed at the box office in the United States became a Rocky Horror Picture Show-level cult hit in Winnipeg. If you’d like to join in on the conversation, Phantom Of The Paradise came out this week on a features-packed Scream! Factory Blu-ray, and is available for rent or purchase from multiple online video retailers. So just sign this 1,000-page contract in your own blood (skip the fine print, which is just there for your own protection), and take your place in line. The Paradise will open next Tuesday.

Upcoming Movies Of The Week
August 18: MacGruber
August 25: Out Of Sight
September 1: Hedwig And The Angry Inch
September 8: The Lady Eve