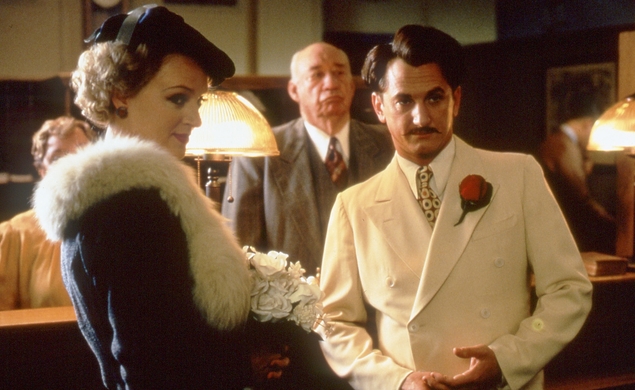 “‘We tell ourselves stories in order to live,’ Joan Didion said, and (as she is about most things) she’s dead on… I think a lot of people (although probably not the Joan Didion afficianados) take this quote optimistically—understanding it to mean something along the lines of ‘art sustains us’ or ‘we write things of beauty to feed our souls’ or whatever—but I’m pretty sure that’s not what she was thinking. Sometimes the only things that can keep us alive are the ones that hurt us. The drills that have to go through our skulls in order to dig out the tumors beneath the surface.  Sweet And Lowdown falls into this category. It may allow us to live, but not because of its celebration of the human spirit. At heart, the story of Emmett Ray keeps us alive, quite simply, because it scares the shit out of us.”

Slate’s Douglas Wolk on James Brown and Get On Up:

“The movie’s era-hopping structure (in its first few scenes, it bounds from 1988 to 1968 to 1939 to 1964) keeps it lively, but its scrambled chronology and far-too-frequent flashbacks to Brown’s miserable childhood obscure the constant musical evolution that kept him artistically vital for the first few decades of his career. [Director Tate] Taylor only offers one clear example of how radically Brown’s music changed over time: We see him singing ‘I Got You (I Feel Good)’ in the 1965 movie Ski Party, wearing a dorky sweater and a big, fake smile while square white teenagers clap along—and then, for a few seconds, we get a flash of Brown sweatily yelping the funked-up version of the song that he was playing in the mid-’70s.”

“The son and heir of cartoonist Max Fleischer, Richard Fleischer rode the Hollywood beast for forty years at the height of studio control, an era marked by trying to put the artist in a box. Contract directors were regarded as interchangeable functionaries, able to deal equally with assignments across a spectrum of genres, but Fleischer brought clarity and directness to mass-market storytelling, with a gravity and discipline that allowed no room for sentimentality. Among his projects, many were ambitious in physical scale and sometimes in stylistic complexity (like The Boston Strangler), but he was rarely credited for the graceful pageantry of The Vikings; or the grandeur of shooting the real-time eclipse of the sun in Barabbas; or the visual excitement of a propeller whirling furiously off a plane engulfed in flames in Tora! Tora! Tora!”

At Film School Rejects, Zak Forsman shares his experience dealing with piracy of his film, Down And Dangerous:

“Tweets and user reviews were showing up on IMDb and our Facebook page from people who could only have seen a pirated version. I was torn between retweeting positive reactions and revealing that it was out there. In January, a copy of the Turkish-dubbed broadcast was uploaded to YouTube. This version had cut 15 minutes out of the movie to remove nudity, drug use and… a shot of a box of tampons. The movie has been uploaded in its entirety to YouTube about a dozen times now. Most recently, I issued a takedown for a Vietnamese-subtitled version.”

Plus, the rest of today’s biz-ness:
-The trailer for Jarhead 2: Field Of Fire
-First images from Jon Stewart’s Rosewater
-New posters for David Fincher’s Gone Girl
-Guardians Of The Galaxy has the best Thursday box office of 2014
-This Marvel promo clip has your first look at Josh Brolin as Thanos