After Midnight: Go Down Death 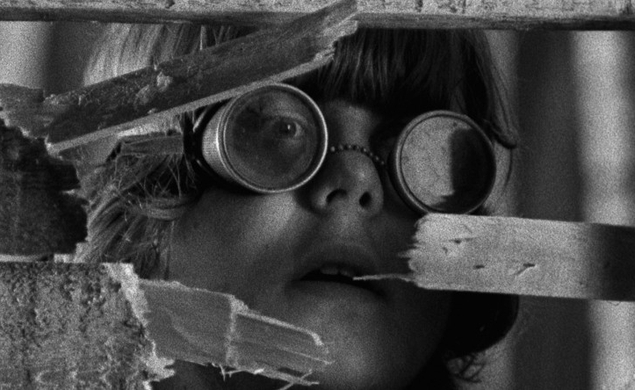 One of this year’s strangest films arrives on various on-demand platforms this week (including iTunes, Amazon, Vudu, and the like). Writer-director Aaron Schimberg’s Go Down Death is indie to the core: a dreamy mood-piece with the handmade grotesquerie of early Guy Maddin and David Lynch. Go Down Death’s opening title card reads, “The complete works of folklorist Jonathan Mallory Sinus comprise no more than six pages, including annotations. Naturally, some extrapolation was necessary to bring this lengthy adaptation to theaters across your country.” That sets the tone for a film that has a sense of humor about itself, but also a sense of ambition. Schimberg and his producer—his wife, Vanessa McDonnell—aren’t just inventing their own mythology with Go Down Death. They’re telling the stories that fit between those stories.

Reportedly shot over the course of several years in an abandoned paint factory in Brooklyn, Go Down Death is mostly set at a crumbling brothel, where grizzled men—who look like either soldiers or cowboys, and nearly all speak with New York accents—spill their philosophies, memories, and fears to sympathetic prostitutes. Meanwhile, a young boy named Butler visits a doctor, goes to school, digs graves, and reads his poetry aloud, as explosions periodically rock the little community where all of these survivors (if that’s what they are) live. Schimberg purposefully doesn’t name where or when this story is set, except to say that it’s not the city, and that the action takes place after some sort of catastrophic event that changed everything. Now there’s nothing left to do but sing songs, play cards, drink, and talk.

It’s the talk that keeps Go Down Death lively. The movie looks stunning: shot on film, in black-and-white, with a mix of sets and models to help create a purgatorial atmosphere. But the quality of the acting varies, and the overall mood is morose, which, when combined with Go Down Death’s scattered structure and general unreality, makes the movie seem initially pretentious and pointless. But the more the characters deliver their little monologues or have their little arguments, the more Schimberg establishes that he does have a vision, and hasn’t just been goofing off in Greenpoint. When the schoolteacher listens to Butler’s horrifying poem and then asks the class, “Thoughts?” (just like a schoolteacher who’s not living in a post-apocalyptic neverland), or when one rhyming prostitute shares her favorite self-help book (which is also in rhyme), Go Down Death develops a puckishly musical quality, like a sprawling folk song where the lyrics are a mix of legends, jokes, and stream-of-consciousness imagery.

Go Down Death won’t be for everybody. It’s a midnight movie in the tradition of Alejandro Jodorowsky and The Saragossa Manuscript, and while it has enough edges and texture to stick in the mind long after it’s over, it’s also the kind of film that stubbornly refuses to yield to interpretation. (Schimberg’s gear-shifting ending ultimately obscures more than it illuminates.) But Go Down Death is imaginative, poetic, and fleetingly funny. It’s a bold piece of work, and that boldness matters. If the film were even a little bit hesitant, it could fall apart completely.