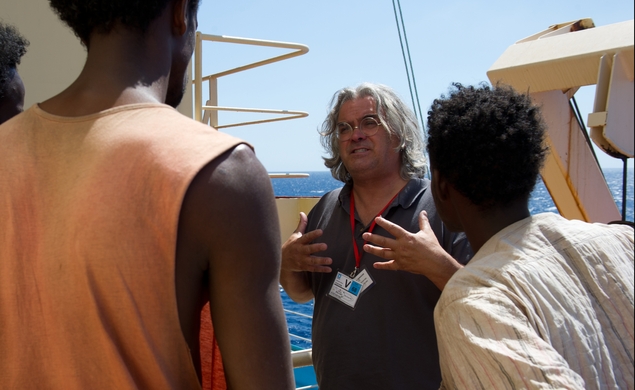 Stop me if you’ve heard this one before: Paul Greengrass is slated to direct a taut, politically-charged thriller. Sony recently acquired the rights to Agent Storm: My Life Inside Al Qaeda, the non-fiction account of an Islamic extremist’s work as a double agent for Western intelligence agencies. Sony will team Greengrass with über-producer Scott Rudin on the project, the pair’s follow-up collaboration to last year’s excellent Captain Phillips. The book has yet to see an actual release, hitting shelves in August, but Amazon provides a helpful synopsis:

“Morten Storm was an unlikely Jihadi. A six-foot-one red-haired Dane, Storm spent his teens in and out of trouble. A book about the Prophet Mohammed prompted his conversion to Islam, and Storm sought purpose in a community of believers. He attended a militant madrasah in Yemen, named his son Osama, and became close friends with Anwar al-Awlaki, the American-born terrorist cleric. But after a decade of Jihadi life, he not only repudiated extremism but, in a quest for atonement, became a double agent for the CIA and British and Danish intelligence… Agent Storm takes readers inside the jihadist world like never before, showing the daily life of zealous men set on mass murder, from dodging drones with al-Qaeda leaders in the Arabian desert to training in extremist gyms in Britain and performing supply drops in Kenya.”

Between Phillips, 2010’s Iraq War thriller Green Zone, 2006’s 9/11 drama United 93, and the second and third entries in the Bourne franchise, Greengrass has built a markedly consistent oeuvre. The director is adept with hot-button action pictures, but his docu-fiction template has grown a bit predictable. The brilliance of Captain Phillips laid in the shared humanity between Tom Hanks’ captain and Barkhad Abdi’s Somali pirate. Perhaps the dual allegiances of Agent Storm’s hero will make a similar statement?