Coolness: A T2 trailer that tries to un-spoil Arnold Schwarzenegger’s role in the film 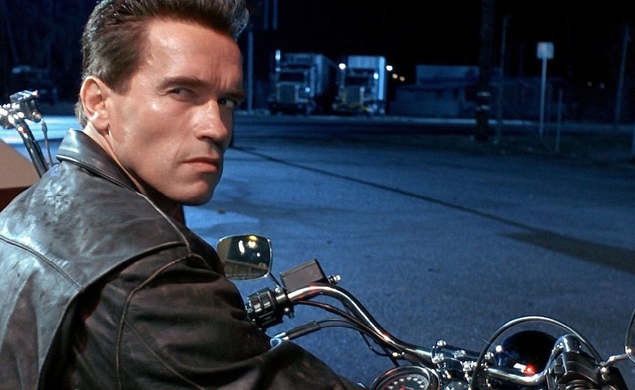 This week’s Keynote essay about Terminator 2: Judgment Day by Tasha Robinson focuses on the film’s marketing campaign, which was simultaneously successful and disastrous. It was successful insofar as it brought people into the theater; with more than $500 million in global ticket sales, T2 was the easily biggest box-office hit of 1991. It was disastrous in the way in which it essentially ruined director James Cameron’s carefully plotted first act, which was designed to disguise the fact that Arnold Schwarzenegger’s previously villainous robot was now the hero of the sequel.

As Tasha explains, the opening of T2 keeps that detail obscure, describing only a “lone warrior” from the future who would protect the eventual leader of humanity John Connor (Edward Furlong). Schwarzenegger’s character assaults an entire biker bar to get what he wants; Robert Patrick’s character is relatively polite and subdued in his efforts to find Connor. With only the knowledge of the first Terminator, a reasonable person might assume Schwarzenegger is the bad guy and Patrick is the hero. But, as rightfully noted in Tasha’s Keynote, almost no one went into T2 with only the knowledge of the first Terminator, because of this trailer:

There were some valid reasons for Carolco to market T2 the way they did, including Schwarzenegger’s emergence as a major movie star (and a hero to kids in films like Twins and Kindergarten Cop) and the astounding special effects that went into Patrick’s liquid Terminator, which were a major attraction in the film but would be almost impossible to spotlight without spoiling Schwarzenegger’s secret. But what if Carolco had tried? After our Movie Of The Week coverage of Terminator 2, Twitter user @badmoviedrink sent us this video, an attempt to create a trailer for T2 that obscured Schwarzenegger’s identity. It’s a pretty interesting experiment and a pretty solid result too. Take a look:

As you would expect, the trailer downplays the T-1000 almost entirely, which no marketer on Earth would have done; if you spend more money on a movie than anyone in history creating groundbreaking special effects, you’re sure as hell going to sell that idea to audiences. This clip makes T2 look more like an exploitation film than a blockbuster, but it does do a decent job of selling the concept of a grittier Terminator sequel with an evil Schwarzenegger. Through the use of some clever editing, it even makes it look like Sarah and John Connor are running away from the T-800 as it methodically chases after them, which is really cool.

In the end, it’s understandable why we got such spoiler-y trailers for Terminator 2 and the movie wasn’t hurt too badly by them either; I saw the movie as a kid knowing full well Schwarzenegger was the good guy and it still blew my nine-year-old mind. Even knowing who is who, that opening sequence remains loaded with suspense, because you don’t know who’s going to find John Connor first. And, really, once Schwarzenegger lays waste to that biker bar, and Cameron winkingly throws “Bad To The Bone” on the soundtrack, isn’t the jig kind of up anyway?