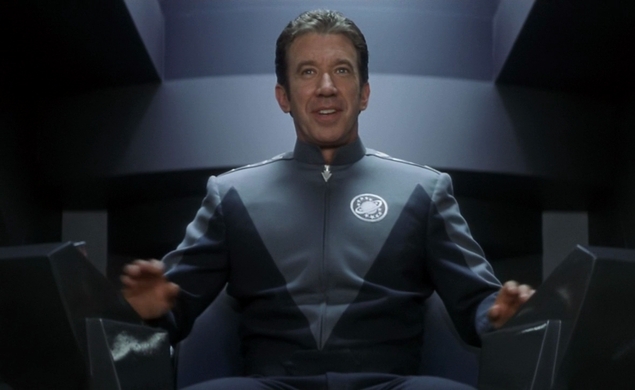 MTV’s Jordan Hoffman with the oral history of Galaxy Quest:

“Tim Allen: Jeffrey Katzenberg got a hold of me and said, ‘We have a perfect movie that would use your smart-ass skills and it’s science fiction.’ I was looking at two other movies at the time. One didn’t get made. It was an angel movie. The other one Robin Williams ended up doing. It was about a robot. Bicentennial Man. But it had no sense of humor to it. It’s very sad. How do you make a robot that doesn’t look like Data? But anyway, within three weeks of casting me, Galaxy Quest had Dean Parisot and went into a very different direction.”

“The argument that the updated version of Star Wars constitutes Lucas’ original ‘artistic vision’ is not entirely cohesive. Such an admission implies that, had computer generated graphics existed in the 1970s as they do today, Lucas’ original version of Star Wars would have more closely resembled the Special Edition. However, this argument is historically and technologically deterministic—that Lucas was somehow destined to make the Special Edition at any point in history. Films as artifacts are a product of their cultural, historical, and aesthetic limitations, and as such, the original Star Wars theatrical prints should be preserved as a representation of science fiction filmmaking in the late-70s and early-80s.”

“Ace In The Hole is full of bees. It’s the most scabrous, uncompromised work from Billy Wilder, who never made a movie that wasn’t kind of an asshole; and never made a movie that didn’t reflect the essential nihilism of his worldview. He’s a fascinating figure, Wilder--a director of obvious genius who has defied easy auteur classification not because he didn’t have his distinguishing characteristics (the outsider hero yearning for assimilation, for instance), but because his films are only queasily liked and then only at arm’s length. His stuff is poisonous. There’s a sense that reviewing him is like trying to dissect a facehugger: if you poke too insistently, you’ll release acid.”

At The New York Times, Nelson George on Get On Up and James Brown onscreen:

“African-Americans tend to view any Hollywood treatments of their history with at best guarded optimism and often with dread. Decades of omissions, half-truths and outright lies about their role in this nation’s history tend to make black viewers skeptical of the most well-intentioned projects. There is also a sense that black directors and writers are being excluded from telling these stories in Hollywood since, with a few notable exceptions (Mr. Daniels, Steve McQueen of 12 Years A Slave and Ava DuVernay of Selma, among them), these films have been told by white producers, writers and directors.”

Plus, the rest of today’s biz-ness:
-Sinister 2 opens on August 21, 2015
-The teaser for Jake Gyllenhaal’s Nightcrawler
-The first poster for Mad Max: Fury Road
-The trailer for Out Of Print, a doc about L.A.’s New Beverly Cinema
-Robert Downey Jr. is “open” to Iron Man 4, money