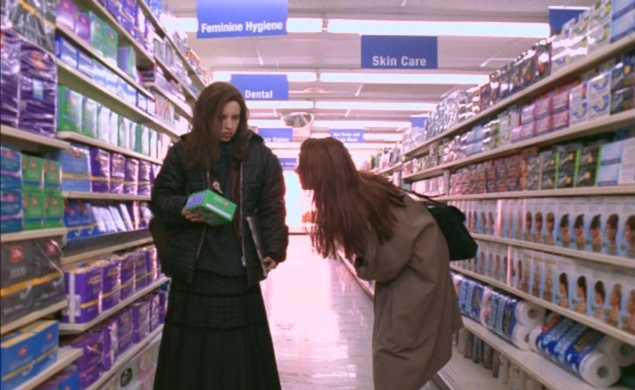 I’ve had a lot of good experiences over the years at film festivals, but nothing like the 2001 edition of SXSW, where over the course of about four days I saw Memento, Amores Perros, Lukas Moodysson’s Together, a secret screening of Waking Life, Super Troopers, the O Brother, Where Art Thou? concert film Down From The Mountain, a touching little indie film called The Wilgus Stories, Alan Berliner’s profound essay-film The Sweetest Sound, Doug Pray’s excellent turntablist documentary Scratch, the epic John Cassavetes bio-doc A Constant Forge, and the teenage werewolf movie Ginger Snaps. I’m not going to argue that Ginger Snaps was as transformative an experience as Waking Life, Memento, Together, or even Scratch (a film that should be better-remembered), but as often happens at festivals, the movies started to speak to each other, and about each other, which meant that Ginger Snaps’ clever conflation of female puberty and lycanthropy beecame another in the succession of films that weekend that burned with passion, style, and ideas.

Ginger Snaps is still a good film now, even though a lot of what director John Fawcett and his co-writer Karen Walton have to say about teen angst, feminine identity, and gender-specific power-dynamics has become more commonplace in movies, YA literature, and TV series (including Orphan Black, a show that Fawcett co-created, with Walton as a staff writer). The masterstroke of Ginger Snaps is that rather than telling the story of one misfit teen girl who changes her personality overnight when she gets bitten by a werewolf, Fawcett and Walton give Ginger (played by Katharine Isabelle) an equally unpopular sister, Brigitte (Emily Perkins), who gets worried when the person she loves most in the world pulls away from her, and starts dressing sexy and going after boys. While Brigitte tries to sound an alarm that Ginger isn’t really Ginger any more, their perky suburbanite mother (Mimi Rogers) tries to reassure Brigitte that this kind of change is common with teenage girls, and that, “Your turn’s coming too.” That’s how Ginger Snaps turns maturation and socialization into a nightmarish transformation—by seeing it through the eyes of a young girl who wants no part of it.

Scream! Factory’s Ginger Snaps DVD/Blu-ray set is one of the most extras-laden that the company has ever put out, adding separate Fawcett and Walton commentaries, home movies from the set, deleted scenes, and a roundtable discussion between prominent female horror fans about the tradition in horror of tying puberty to malevolence. But the big bonus here is an hour-long look back by the movie’s creative team and cast, who talk about the practical make-up effects (which they quickly realized would look sillier the longer they were onscreen), the grounding presence of Rogers (who came up with one of the film’s best gags, using a bottle of spray-cleaner on Ginger’s blood-soaked underwear), the energy of the teenage cast (which had a bad habit of tossing improvised “fuck”s into its dialogue, making the movie come off as more vulgar than it was meant to be), and how a key New York repertory screening and a surprise sale to HBO changed the fortunes of a film that had died at the box office in the U.S. and in its native Canada.

Scream! Factory’s Ginger Snaps set tells the movie’s story well, and explains why it resonated with so many people back in the early 2000s. Walton says at one point that she never wrote the script as “a feminist checklist,” but instead just thought back to her own adolescence, and worked from there. Thanks to that magical paradox that often happens in art, it was Walton’s personal touch that made Ginger Snaps more universal.