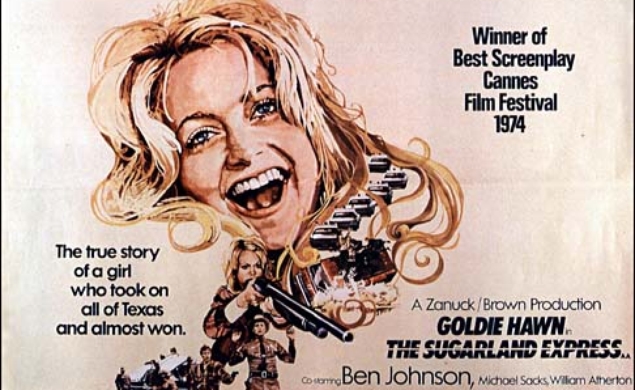 Steven Spielberg’s 1974 theatrical feature debut The Sugarland Express was a natural follow up on his TV-movie success Duel, in that both movies give heavy machinery its own personality. An entry in the post-Bonnie And Clyde “hicks on the lam” genre, The Sugarland Express stars Goldie Hawn and William Atherton as married ex-cons who kidnap a Texas patrolman (played by Michael Sacks) and then set out to retrieve their baby from foster care. As with Spielberg’s other 1970s films Jaws and Close Encounters Of The Third Kind, The Sugarland Express mixes overlapping dialogue, pop-culture references, soft light, and nifty practical effects (such as when Spielberg makes a split-screen out of a rear-view mirror set against a narrow car window). In the film’s most memorable recurring image, a line of cars hangs behind the heroes, stopping when they stop and turning when they turn. It’s an exciting bit of B-movie sensationalism, and a potent visual representation of how problems pile up. The Sugarland Express airs on Turner Classic Movies on Saturday night at 8 p.m. Eastern, followed by an “AFI Master Class” interview between Spielberg and composer John Williams.