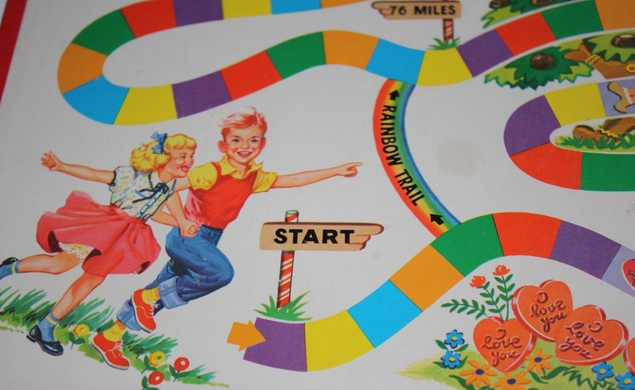 Back in 2012, Sony Pictures and Adam Sandler’s Happy Madison Productions turned over a green card and began developing a live-action movie based on the Hasbro board game Candy Land, with Enchanted’s Kevin Lima set to direct, Sandler set to star, and Sandler and Robert Smigel set to co-wrote the script. But no one counted on the minions of Lord Licorice—in this case, Landmark Entertainment Group, which yesterday filed a lawsuit to stop the film, claiming ownership of several of the potential characters.

According to The Hollywood Reporter, Landmark says it was involved with a mid-1980s revamp of Candy Land’s design, back when the game was still owned by Milton Bradley; and the company signed a contract at that time granting a $50,000 fee and future royalties. Milton Bradley later sold the game to Hasbro, but Landmark says that the license that allowed first Milton Bradley and then Hasbro to keep making Candy Land board games did not allow for videogames, cartoons, tchotchkes, or movies derived from Landmark’s work, without permission and payment.

Landmark’s suit is against Hasbro, and concerns more than just the film. At this time it’s unknown whether Sandler was planning to make a Candy Land movie based on the basic rules of the game, which date back to 1945, or whether he and Smigel are writing a script that incorporates characters like King Kandy and Princess Lolly, which Landmark helped create (or, for that matter, the Duke Of Swirl, who postdates Landmark’s involvement). THR sought a reaction from Hasbro and Sony, but both companies declined to comment. It could be that they’re all already laboriously making their way toward the Gumdrop Path of a generous financial settlement.