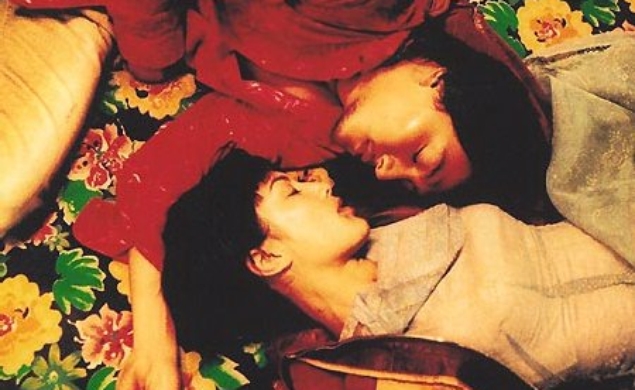 Michel Gondry’s Mood Indigo is out this week, and continues the director’s career-long migration back and forth between feature films and music videos. Gondry’s one of the most famous examples of a major director who got his start doing videos and commercials, but a lot of other filmmakers—including Spike Jonze and Jonathan Glazer—have dabbled in making promo clips, sometimes as a mere work-for-hire assignment, sometimes as a creative exercise, and sometimes as a favor to favorite musicians. Here are five of those videos, made by people who aren’t always necessarily thought of as “music-video directors.”

David Fincher was one of a group of young filmmakers—like Jonze and Michael Bay—who got his big break in the business working for the commercial production house Propaganda Films. But Fincher didn’t really distinguish himself in the music video format during the era when he was making a lot of them, in the late 1980s. He made some memorable clips (Paula Abdul’s “Forever Your Girl,” Madonna’s “Express Yourself”) but tended to spotlight the performer first and foremost. That’s certainly the case in Fincher’s video for the Johnny Hates Jazz’s soft-pop hit “Shattered Dreams,” which layers in some goofy effects, making the band look unusually tiny. Really though, the “Shattered Dreams” video is about making JHJ come off as slick and stylish, in hazy black-and-white.

Jonathan Demme
The Feelies, “Away”

Jonathan Demme was such a big fan of the seminal New Jersey alt-rock act the Feelies that he cast them as the high-school reunion band in his 1986 film Something Wild. Later, when the never-that-prolific Feelies made their major label debut with the 1988 album Only Life, Demme directed a dynamic performance clip for the jangly, fast-paced song “Away.” Like Demme’s Talking Heads concert film Stop Making Sense, the “Away” video is meant to capture the excitement of seeing a band live, emphasizing restless motion, the energy of the crowd, and what tthe Feelies once dubbed “crazy rhythms.”

Peyton Reed made some good films early in his career—Bring It On and Down With Love in particular—but how he does as Edgar Wright’s replacement on Ant-Man will likely determine whether he’s going to be an A-list auteur or a journeyman. If Wright’s supporters need some reassurance that Reed’s Ant-Man can be as soulful and playful as Wright’s version, they should take a look at the video for “Package Thief” that Reed made for his North Carolina neighbors Superchunk in 1993. Turning the band into marionettes, Reed does an excellent job of replicating the rush an actual Superchunk performance, which is defined by the bandmembers bouncing up and down and singing their angst out.

Michael Penn has a brief but memorable cameo in Paul Thomas Anderson’s Boogie Nights as the recording engineer who suffers through Dirk Diggler’s terrible rock album; and while Anderson was editing that film, he took time out to shoot a cool, elaborately choreographed video for Penn’s song “Try,” shot in one take in a quarter-mile-long hallway. Boogie Nights supporting players Thomas Jane, Melora Walters, and Philip Seymour Hoffman all pop up briefly in the clip, but the real star is Anderson’s ambitious blocking and mise-en-scène, which throws all manner of people and props at the game Penn over the course of three packed minutes.

Josh “DJ Shadow” Davis commissioned one of his favorite filmmakers, Wong Kar-wai, to make a video for the dreamy 2002 song “Six Days,” and Wong called on some of his regular collaborators, including actor Chang Chen and cinematographer Christopher Doyle. The resulting clip has the quality of some of the more sensual sequences from Wong’s films, rendering the romantic connection of two people as a series of messy grapplings, with body rubbing against body. Wong introduces some undertones of violence and crime too, keeping “Six Days” in line with his usual thematic obsessions, while maintaining the sense of mystery that pervades both DJ Shadow’s music and Wong’s visual aesthetic.