Our next Movie Of The Week: James Cameron’s Terminator 2: Judgment Day 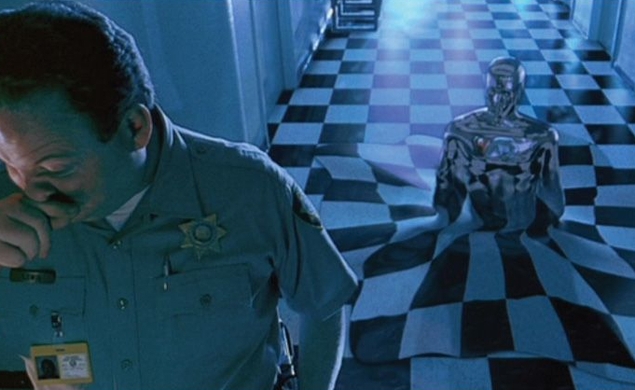 “I’ll be back.” James Cameron’s 1984 science-fiction action thriller The Terminator established a couple of iconic lines, a couple of iconic characters, and a memorable situation involving a killing machine from the future traveling back in time to murder its master’s biggest adversary before he’s even conceived. In 1991, Cameron returned to pick up the scenario, the characters, and the catchphrases, and add a few more in the process. (“Hasta la vista, baby.”) Made on an unprecedented-at-the-time $100 million budget, Terminator 2: Judgment Day went bigger than the first film in all respects, introducing a meaner, tougher future-machine, bigger explosions, more chases, and an even more ambitious story that fleshed out the background of its future world. At the same time, it hung onto the human dimension better than most blockbuster sequels do, and in a surprisingly touching way, it’s an early story about an unconventional blended family making each other’s lives more meaningful (and also much more survivable).

We’ll continue Blockbuster Month at The Dissolve by looking at Terminator 2 in depth next week, kicking off with a Tuesday Keynote about how the film’s marketing recklessly spoiled what could have been one of the all-time great reveals. Our Wednesday Forum digs into Cameron’s conflicted view of technology, the film’s dated-but-memorable action, and the unusual focus on character trauma. And on Thursday, a secondary essay examines the LAPD’s complicated cinematic history, as the traditional heroes turned into movie villains. Come with us if you want to watch.

Upcoming Movies Of The Week
July 28: The 40-Year-Old Virgin
August 4: The Double Life Of Veronique
August 11: Phantom Of The Paradise
August 18: MacGruber