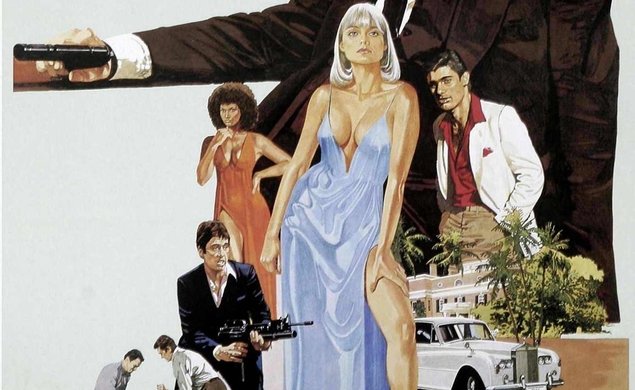 It’s a double-shot of vice-lording tonight on Turner Classic Movies, as the channel airs the 1932 gangster classic Scarface at midnight, followed by director Brian De Palma and screenwriter Oliver Stone’s 1983 quasi-remake at 2 a.m. Eastern. In recent years, the De Palma film has become what most people think of as “Scarface,” thanks to the way that hip-hop, TV crime dramas, and other modern gangster movies have borrowed liberally from the 1983 movie’s stylish depiction of a Cuban refugee (played by a heavily accented Al Pacino) who becomes a cocaine kingpin. Though a little out-of-character for De Palma—who tends not to make sprawling, nearly three-hour epics, or movies where the criminals are big-shots and not creepy loners—Scarface is still a film about excess directed by a man who’s never been overly concerned with restraint. And yet by 1930s standards, Howard Hawks’ Scarface (a.k.a. Scarface: The Shame Of The Nation) is just about as violent: a ruthless, bullet-riddled, rags-to-riches-to-grave saga, with Paul Muni as an Italian immigrant who becomes a beer baron. And the 1932 Scarface is even more expressive than De Palma’s, with the editing, cinematography, and “X”-laden set-design creating a feeling of restless anxiety. Both of these films are about how crime can be an irresistible temptation for America’s impoverished outsiders, yet also about how success in America creates its own insatiable demands that inevitably consume the successful.