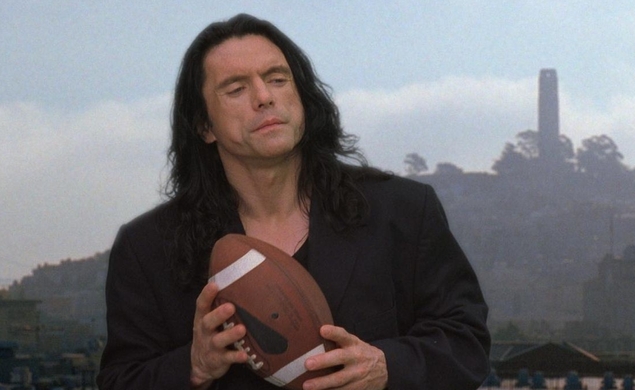 Oh hai Dissolvers. It’s hard to believe, but it’s already been over a decade years since Tommy Wiseau made The Room, and nearly a decade since the film grew into this generation’s biggest, strangest, and most cultishly popular midnight movie. In the intervening years, Wiseau has toured with the film, made a little-seen documentary about homelessless, and appeared in a handful of short films and television shows. He also produced a television pilot called The Neighbors that was never picked up, which is surprising because Wiseau’s past work is so competent and accessible that a TV show with his unique aesthetic seems guaranteed to become a long-running series.

After years of inactivity, The Neighbors has suddenly sprung back into the public consciousness (or at least that segment of the public consciousness that keeps tabs on Tommy Wiseau’s activities). The show’s official website now proudly boasts it’s “coming this fall” to Comedy TV, and a new trailer popped up on YouTube. It is… Wiseauesque. If you’ve ever thought “That Seth Rogen Neighbors movie was fun, but wouldn’t it be better if it looked like a hideous underwear commercial crossed with a bath salts hallucination?” this is the YouTube video for you, you crazy weirdo.

And here’s some of the official synopsis from The Neighbors website:

“The Neighbors is a sitcom about the relationship between a group of neighbors who live in an apartment building… This cocktail of characters always guarantee plenty of surprises. The demographic is all inclusive. In the pilot, Mariana is obsessed about bugs in her apartment. Monica catches her boyfriend Den in bed with Patrick. Princess Penelope arrives and Darren serenades her with accompaniment from the other tenants. Richard becomes Princess Penelope’s butler and handyman. Ed prepares a birthday party for Bebe.”

A guy named “Den?” And a princess? Like, an actual princess? Also, doesn’t the whole butler subplot sound like the pilot Jerry and George made for NBC on that one season of Seinfeld? What are the odds Tommy Wiseau is a fan of Seinfeld? How much would you pay to see Wiseau on Seinfeld in the Kramer role? Should we do a Kickstarter for that? I’m pretty sure we could get potato-salad level money for that idea.

I’m currently in the middle of The Disaster Artist, actor Greg Sestero’s book about the making of The Room and his relationship with Tommy Wiseau. It is a fascinating read, and it makes Wiseau himself seem even stranger and more riveting than he appears in The Room. I’m already anticipating James Franco’s film version of The Disaster Artist, and now I’m hoping Wiseau will capitalize on the attention and bring The Neighbors to theaters around the same time as a midnight attraction. I have to imagine the merchandise table at such an event would be quite a sight to behold.