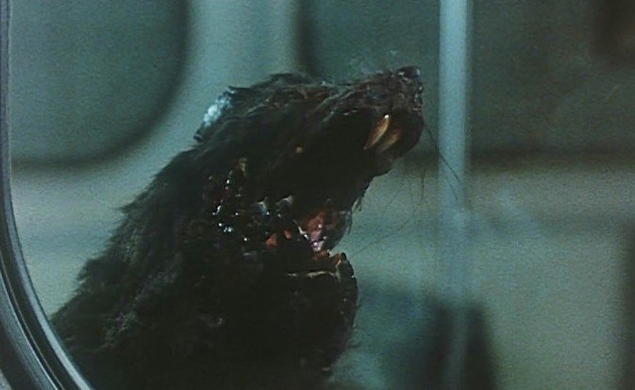 Scream! Factory’s done an excellent job of unearthing early 1980s video store favorites to release on special-edition DVD/Blu-ray sets, and while the movies themselves aren’t always forgotten horror classics, there’s usually something about them to entertain genre fans or nostalgists—even if it’s just the font used on the opening credits. It’s obvious that director Robert Clouse and screenwriter Charles Eglee’s 1982 adaptation of James Herbert’s horror novel The Rats is going to be something special within its first ten minutes. The film opens with the line, “Despite our vaunted technology, there are 24 rats for every man, woman, and child alive today”—and no horror movie that starts with a thesis statement can be wholly un-enjoyable. Then the opening credits begin, and the title on the screen, Night Eyes, doesn’t match the title on Scream! Factory’s box, Deadly Eyes. And the one immediately recognizable actor in the film, Scatman Crothers, pops up in one of those first scenes, only to disappear for half an hour, and return in time to be eaten by mutant rats. What’s not to like?

As with so many exploitation/horror films, Deadly Eyes starts with a good shock, introducing hordes of killer rodents, and then lays back for a bit, saving most of the rest of its thrills for the last act. But it’s never dull, even when it’s about ordinary Torontoans and not about rats. Clouse, who also directed Enter The Dragon (or, if you prefer, Gymkata), made Deadly Eyes look as much like a mainstream motion picture as he could on a B-movie budget, making good use of Anthony Guefen’s unexpectedly lavish orchestral score, and of the appealing ordinariness of his star, Sam Groom. (The scene where the lonely, divorced hero makes himself a frozen dinner while reading the instructions aloud is one of the best in the whole film.)

Still, the real selling-point of Deadly Eyes is its final 20 minutes or so, when Clouse cuts between rats at a bowling alley, rats in a subway car, and rats in a movie theater (!). The rats themselves look ridiculous—probably because Clouse put Dachshunds in rat costumes—but the idea of writhing, furry beasts scurrying through populated dark spaces is genuinely creepy, culminating in a final scene that puts a blackly comic punctuation mark on the whole picture. Don’t get me wrong: Deadly Eyes is garbage. But it has an interesting aroma.