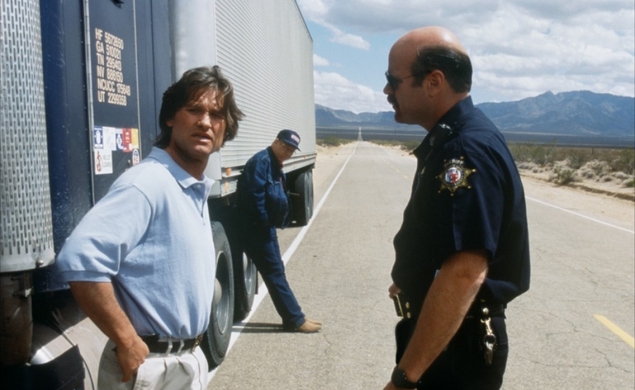 As several Dissolve readers observed yesterday, perhaps the most exciting part of Kurt Russell’s offhand comment about working on Quentin Tarantino’s upcoming The Hateful Eight is that Russell needs to be in more movies, period. He’s had an odd career, Russell—always a fan-favorite, but never as big a star as he should’ve been, perhaps because he didn’t land enough blockbuster roles, or maybe because he’s gravitated more to semi-eccentric B+ fare. But the upside to Russell’s quirky choices is that his filmography is loaded with really good films that not enough people have seen. Epix Drive-In is airing one of those at 9:50 p.m. Eastern tonight: 1997’s Breakdown, a throwback thriller which stars Russell as an ordinary guy who suffers what seems like ordinary car trouble, until he finds himself targeted by a team of interstate bandits, who kidnap his wife and demand a big ransom. Director Jonathan Mostow (who didn’t go on to as great as a career as Breakdown seemed to promise) and his co-screenwriter Sam Montgomery keep this movie simple, letting Russell carry a lot of the emotional load as a frantic man in the middle of nowhere, at the mercy of a cruel thug played by J.T. Walsh. The movie ranges toward the preposterous, but it’s so lean and action-packed that the plot-holes scarcely matter. Besides, Russell is convincing and ingratiating enough to sell anything.