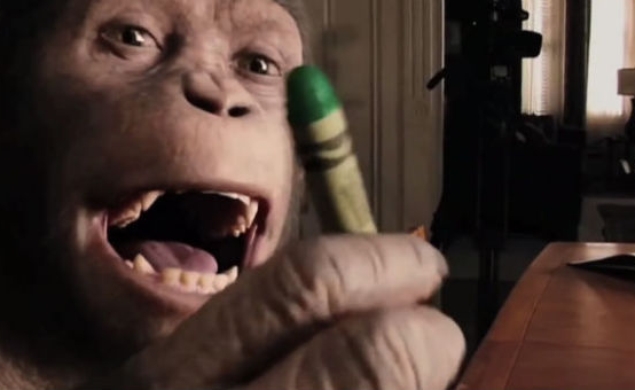 Richard Linklater’s long-awaited “12 years in the life of a kid” movie Boyhood opened this weekend to extremely strong reviews and excellent box office, but so far it’s only playing in five theaters, so it remains to be seen if it’ll have legs, as they say in the biz. Boyhood’s producer John Sloss though isn’t worried. He sent out an e-mail blast over the weekend offering a “Time Back Guarantee.” This is no mere monetary refund. As Sloss explained, “If you are not absolutely thrilled by Boyhood and/or consider it not to be a good use of your time, I will give you that time back by performing any of your customary chores for up to 2 hours and 43 minutes.” (Legal disclaimer: This isn’t an actual guarantee. But don’t let that stop you from going to see Boyhood anyway.)

What I want to know is: Will Sloss offer the same guarantee for Apehood? Over the weekend, video essayist and mash-up master Nelson Carvajal posted his Apehood trailer, taking the structure and tone of the Boyhood trailer but using footage from both Rise and Dawn Of The Planet Of The Apes. Unexpectedly, the ape version of the Boyhood trailer is almost as moving as the original. I won’t offer any guarantees that you’ll be amused or touched by this video, but since it’ll only take about 90 seconds of your life to watch (minus buffering), why not give it a go?