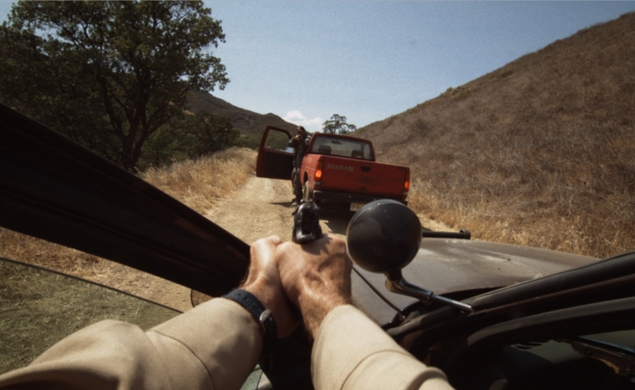 Benjamin Arfmann’s short “Random Stop” hearkens back to cinematic experiments like Lady In The Lake, Dark Passage, and Russian Ark: Movies shot mostly or entirely from a first-person perspective, without the explanation of a camera. Arfmann based the story on a 1998 incident involving Georgia deputy Kyle Dinkheller, who was shot by an agitated speeder on a dirt road, just off the interstate. Though the shooting was captured by Dinkheller’s dashboard camera—and the footage has since become required viewing for police officers in training—Arfmann doesn’t frame the short as though it were pulled off a dash-cam. Instead, it’s made to look like Dinkheller is wearing an expensive camera on his forehead, filming the last six minutes of his life with horrifying clarity.

“Random Stop” debuted at SXSW earlier this year, and was a finalist for BAFTA’s Student Film Awards. Arfmann made it as his MFA thesis film at UCLA, and some of its elements are a little rough and clichéd—in particular, the beginning of the short, when Dinkheller is talking to his wife for the last time. But the film is visually stunning and remarkably well-choreographed, moving cars and actors and a camera in real time. And the first-person gimmick pays off dramatically at the end, when the deputy is in the heat of a shootout, and the audience gets to share the last images he sees.