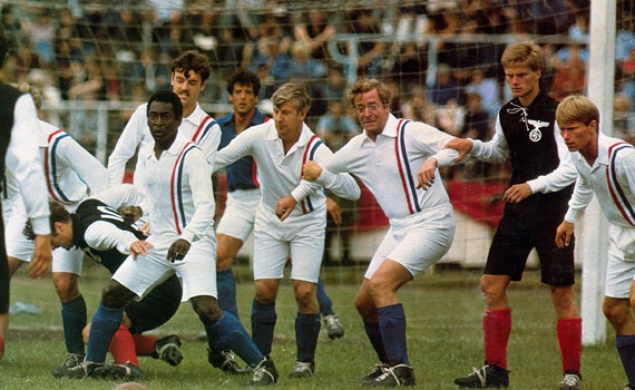 Here in the States, we call football “soccer,” and we call director John Huston’s 1981 football drama “Victory,” even though in the U.K. it’s known as Escape To Victory. (Either we enjoy confusing our British cousins, or we like giving them reasons to feel culturally superior.) And soon it looks like America is going to muddy the football/soccer/Victory/Escape To Victory waters even further, by producing a remake of Huston’s film.

The Hollywood Reporter reports that Warner Bros. has hired Miracle/Warrior director Gavin O’Connor to write the screenplay for a new Victory—which itself was an adaptation of Zoltán Fábri’s 1962 Hungarian film Two Half Times In Hell. Edge Of Tomorrow director Doug Liman is reportedly in talks to direct the film, which would repeat the original’s story of WWII POWs competing in a soccer game against the Germans while plotting an escape. This is a tried-and-true plot—also used in the 1974 hit The Longest Yard and its various remakes—and there’s no reason to think it wouldn’t work well again.

There are only two questions that need to concern Warner Bros. First, will American audiences still be feeling the soccer love after the interest generated by this year’s World Cup fades a bit? And second, who will be the real-life Brazilian footballer to fill the role that Pele played in the first Victory? (My money’s on Hulk.)