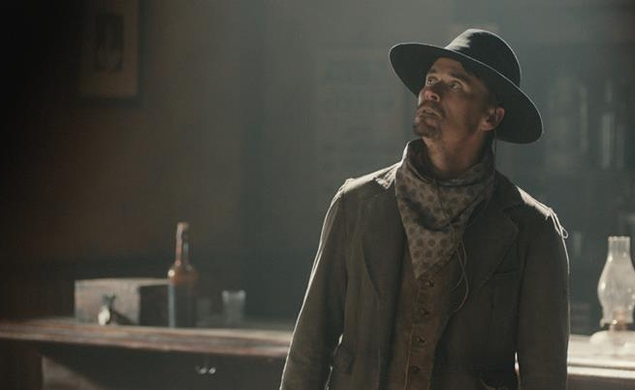 Director Eric Kissack, writer Kevin Tenglin, and producer Sarah Platt have fun with both the classic Western and the convention of the omniscient narrator in their short “The Gunfighter.” But even more than nodding to old Hollywood, the filmmakers call back to Mad Magazine, Stan Freberg, Firesign Theater, National Lampoon, and all the other comedians over the decades who have pulled popular culture apart so they could play with the pieces. In “The Gunfighter,” Nick Offerman provides the voice of The Narrator, describing the action when The Gunfighter (Shawn Parsons) walks into a saloon. The twist is that The Gunfighter can hear The Narrator—and so can everyone else in the bar. And that becomes a problem when The Narrator starts describing what’s going through everybody’s head: Who wants to kiss whom, who’s planning to pull a gun on whom, and who’s having sex with who’s livestock.

Tenglin’s script has a lot to do with why “The Gunfighter” works so well. Sometimes it goes for easy laughs with smutty jokes, though just because they’re easy and smutty doesn’t make they aren’t funny. More often, Tenglin follows this scenario down different paths, looking for the amusing little offshoots—like when one character gets fed up with The Narrator calling him “the oldest Henderson boy,” or when the townsfolk gladly accept The Narrator’s congratulations for their progressive attitudes about race. Kissack—who’s worked as an editor for movies and TV shows by some very funny people, most notably David Wain—manages the tone of the short expertly, never letting it become too broad or too slack.

“The Gunfighter” was one of the Palm Springs ShortFest’s “Best Of The Fest” selections, and won the audience award for Best Short at the L.A. Film Fest. The accolades aren’t surprising. The short is a crowd-pleaser on multiple levels— including the way Offerman’s gruff voice lovingly caresses a line about how a particular cowboy “recently delivered a load of cream to the back porch of his brother’s wife.” But “The Gunfighter” is mostly delightful in the same way as a lot of postmodern or meta-comedy: It calls attention to something that’s become so stock that audiences rarely register it as weird any more. When The Narrator becomes the story, it highlights how odd it would be to have a person constantly hovering overhead, overexplaining.