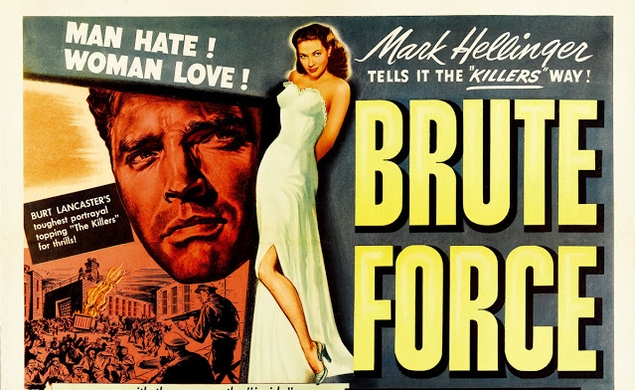 The actor of the day for TCM’s “Summer Under The Stars” program is Ann Blyth, a contract player who never became a big star. (Her best-known role was as the selfish daughter Veda in the magnificent Mildred Pierce, which airs tonight at 8 p.m. Eastern.) But while Blyth is an unusual choice to have her own day on TCM, at least it gives the channel an excuse to show 1947’s Brute Force, a punchy “prison noir” from producer Mark Hellinger, screenwriter Richard Brooks, and director Jules Dassin. Blyth plays a fairly small part in Brute Force, as the sickly wife of iconoclastic convict Joe Collins (played by Burt Lancaster). The movie is mostly about Joe, who leads a group of inmates to rise up and protest conditions that dehumanize them and turn them against each other. From the flashback-heavy structure to the surprising frankness about the cruelty of the state, Brute Force is one of the toughest and most exciting movies of the first noir era. It’ll be on TCM this afternoon at 3 p.m. Eastern.

Or: Sunday, meanwhile, is Natalie Wood Day on TCM. And check out the line-up: West Side Story, The Searchers, Rebel Without A Cause, Splendor In The Grass, Gypsy, Bob & Carol & Ted & Alice, and Inside Daisy Clover. Wood died tragically (and suspiciously) at age 43, but she’d been working in movies since she was five, and left behind a remarkable body of work, documenting both her own maturation as a woman and the changing gender roles in American from the 1940s to the 1970s.