Source Material: The Four Seasons were deserving of respect before Jersey Boys 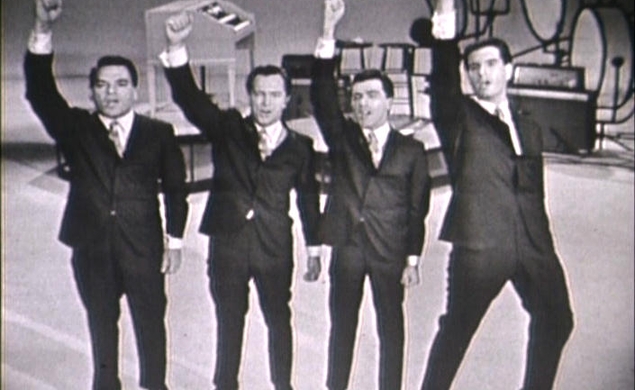 I haven’t seen Clint Eastwood’s adaptation of the Tony-winning musical Jersey Boys yet, and I’m still looking forward to it, even though the early reviews have been largely tepid—including Tasha Robinson’s for our site. I’m a sucker for pretty much any movie about music, but I’m especially interested to see how the jazz-loving, pretension-eschewing Eastwood handles the story of a band who had roots in other kinds of American music—most notably doo-wop and rock—and undisguised aspirations for greatness. Because what’s fascinating about the Four Seasons isn’t just that Frankie Valli and his musical partners recorded such unshakably catchy tunes as “Sherry” and “Rag Doll,” but that one of the band’s chief songwriters Bob Gaudio also pushed his mates into the concept album era with the charmingly strange 1969 LP The Genuine Imitation Life Gazette, and later co-wrote and produced Frank Sinatra’s beautiful flop Watertown. It’s no wonder that Gaudio helped spearhead the Jersey Boys project; he’s always sought to put a fancy frame around his pop songs.

In the run up to Jersey Boys’ release, I’ve sensed some hesitation about the film—perhaps justified, as it turns out—and I’ve wondered if that’s had something to with the original stage musical being popular with older theatergoers, or with the Four Seasons being seen as bland and unhip. But the medley above is a good example of what was always exciting about the group: Valli sang like a boy but looked like a middle-aged tough guy, while the rest of the Four Seasons chugged away behind him like working-class mugs, not superstars. Throughout the performance in this clip, there’s a real sense of creativity to the arrangement, which pulls apart the simple structure of the original songs so that they could all be woven together into one concise statement of who The Four Seasons were. Gaudio’s such an intriguing fellow: A guy who was building up the mythology of his music at a time when few critics were paying much attention, setting up the rediscovery that would come decades later.