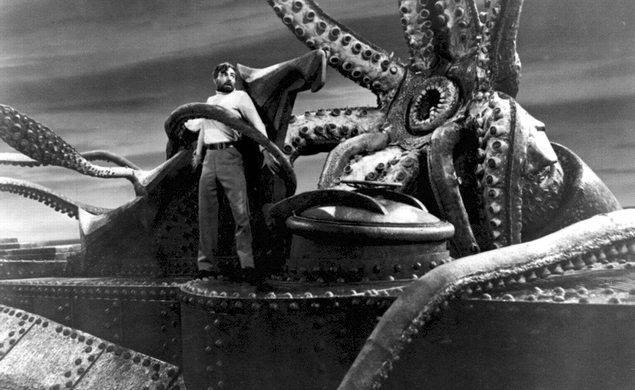 Since 2009, Disney has made two serious stabs at remaking its own classic 1954 live-action adaptation of Jules Verne’s 20,000 Leagues Under The Sea: first with McG as the director, and then with David Fincher. Neither version came to fruition, and now there’s a possibility that Disney will be beaten to the box office by an alternate version of Verne. The Hollywood Reporter reports that Columbia Pictures has bought a spec script called Captain Nemo, written by Smallville creators Alfred Gough and Miles Millar. Described as a “new take” on Verne’s driven, angry genius—the captain of the wondrous submarine The Nautilus—Gough and Millar’s Captain Nemo would reportedly be produced by Joe Roth and Palak Patel, who are coming off the success of Maleficent, another movie about a shadowy literary/Disney character.

Because Captain Nemo first appeared in 1870, the character has long since fallen into the public domain, and has been used by other writers and filmmakers before—perhaps most notably by comics writer Alan Moore, who put his own spin on the character in The League Of Extraordinary Gentlemen series. There no indication in The Hollywood Reporter article of what Gough/Millar/Roth/Patel have planned for their Nemo, and whether they’re planning to adapt Verne’s work directly or merely allusively. But as many have proven, there’s a lot to be done with this strange captain, who’s at once a brilliant scientist and a man who bears heavy grudges. Here’s hoping that this creative team can find their own Nemo.