Short Cuts: “Transformers: The Premake,” a film constructed from civilian videos of a massive movie shoot 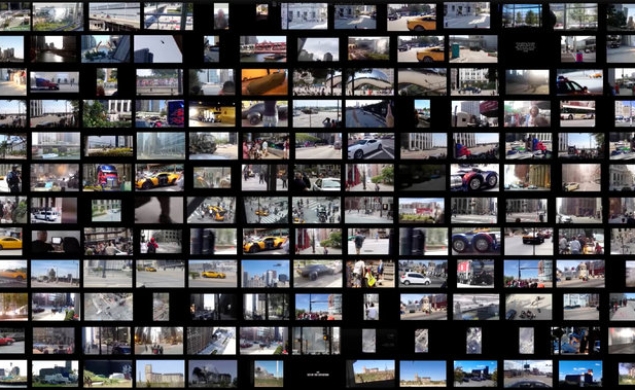 Last year, Chicago-based critic and video essayist Kevin B. Lee (who has done work for The Dissolve) decided to take advantage of Transformers: Age Of Extinction shooting around his home city, and shoot some footage himself: of the action on location, and of the action around the location, where other local Chicagoans and movie-lovers had gathered to take their own videos of the explosions, helicopter chases, and cool-looking robot-cars. Lee’s “desktop documentary” Transformers: The Premake begins in Chicago, skipping around between civilian YouTube clips of the Age Of Extinction stunts and Lee’s own shots, all shown on a computer screen. But Lee soon moves the camera across the screen—that’s the “desktop” part—and opens up video clips from Detroit, Texas, Washington, Utah, and China, mixing them with pictures, Facebook comments, news items, and excerpts from essays about the new global Hollywood economy and the rise of “free fan labor” to promote movies internationally. The result is a behind-the-scenes doc that captures both the world-bending muscle of a major media corporation and the complicity of ordinary people in letting powerful people do what they want.

But while Transformers: The Premake’s insights into modern life and modern moviemaking are depressing, the movie itself is anything but. Lee’s not really scolding the fans here; The Premake seems to acknowledge that big blockbuster explosions are fun to watch, and that it’s genuinely thrilling to catch a glimpse of Mark Wahlberg on the other side of a barricade. (In one of the funnier moments in The Premake, Lee pulls up a YouTube video of an ordinary person who stumbled across the Transformers shoot while on vacation, and fast-forwards through all boring stuff to get the few seconds of Optimus Prime.) And Lee has a lot of fun with the obnoxiousness of Transformers director Michael Bay, seen throughout The Premake berating crew-members, bristling at a Chinese journalist asking him if he’s shooting in China to boost the movie’s international box office, and awkwardly pawing at actress Li Bingbing at a PR event. Lee even includes the viral video of Bay walking off the stage at a Samsung presentation when the Teleprompter failed (and Lee has crowd-shot footage of that, too).

Transformers: The Premake is about the increasingly long cycle of build-up to the release of a major motion picture, and how studios defray the staggering costs by getting communities to provide tax breaks, and convincing local governments and businesses to work for them for nothing. Lee explores the myriad aspects of the complex ecosystem that’s developed, up to and including the way that studios allow some fans to hype their films for them, but shut others down. Lee puts it all together cleverly, contrasting the state censorship of China with the relatively benign (but still irritating) copyright claims of Paramount, and conveying the surreal experience of sitting inside of a Starbucks and watching a city pretend-crumble outside. In the end, Lee takes his cues from a piece of Age Of Extinction set dressing: a giant poster from the Chicago location that reads, “Report Alien Activity.” Transformers: The Premake does just that, thoroughly and entertainingly.