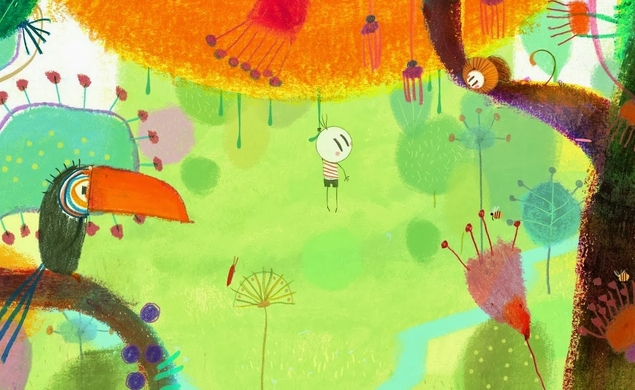 Nearly every year when the Academy Award nominations for Best Animated Feature are announced, there’s at least one nominee that seemingly comes out of nowhere—a funkier, foreign-language film that’s played mainly in festivals and in a few arthouses. Very often the theatrical distributors of that nominee is GKIDS, which has handled the likes of Ernest & Celestine, A Cat In Paris, Chico & Rita, and The Secret Of Kells (as well as such non-nominees as From Up On Poppy Hill, Tales Of The Night, and Sita Sings the Blues). When GKIDS picks up a film for North American distribution, it’s something that animation fans, movie lovers, and Oscar prognosticators should take note of, because there’s a very good chance that the film will be worth seeing, and maybe even wind up in the mix for year-end awards.

Cartoon Brew noted today that GKIDS just acquired Ale Abreu’s Boy And The World, a hand-drawn Brazilian feature about a little kid from the country who travels alone to the city to try and save his family. The film is due to compete at the Annecy animation festival this week, and it already has a trailer, which is pretty stunning:

From the abstracted designs to the layered, chalky colors, Boy And The World looks beautiful and distinctive. It’s already played a few international festivals, and will likely be showing up in some of the major fall festivals later this year. Given GKIDS’ history, it’ll then make the rounds in the U.S. before landing on DVD and/or Blu-ray. In other words: It’ll be seen, which is the best any animation lover can ask for when it comes to these non-Disney, non-Pixar, non-Dreamworks, non-WB films.