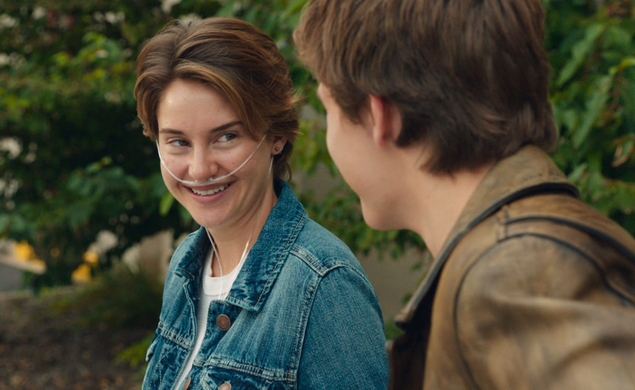 Audiences found no fault in The Fault In Our Stars; the teen weepie (“tweepie?”) based on the best-selling young-adult novel trounced movies with more than ten times its budget, massive movie stars, and decades-old brands at the box office. In its debut, Fault grossed $48.2 million against a reported budget of just $12 million. Shailene Woodley and Ansel Elgort star as cancer patients who meet at a support group and fall in love. Counter-programmed against a market full of big special-effects pictures, The Fault In Our Stars opened huge; the best first domestic weekend for a teen romance film (that doesn’t have the word “Twilight” in the title) since 1980.

Also strong last weekend—even with serious competition for female audiences from The Fault In Our Stars—was Maleficent, with Angelina Jolie as the reimagined villain from Disney’s classic cartoon Sleeping Beauty. In its second weekend of domestic release, Maleficent dropped 51 percent, and grossed $33.5 million, bringing its domestic total after 10 days in theaters to $127.3 million. The movie was costly, with a reported budget of some $180 million, but it has connected with audiences around the world; it’s already made another $200 million overseas. That makes the top two films in the United States in early June two titles about and aimed at women, so the next person who claims that female-driven films don’t make money gets 1,000 noogies.

1,000 noogies also go to the people who claim to want original, non-franchise blockbusters but didn’t turn out to support Edge Of Tomorrow, which opened in third place at the weekend box office with a $29.1 million debut. The Groundhog Day-esque sci-fi thriller about a cowardly PR man (Tom Cruise) fated to die over and over again in a brutal battle with evil aliens garnered great reviews but didn’t stand out in a crowded marketplace (the fact that Cruise just made a similar-looking sci-fi movie, Oblivion, probably didn’t help either). It’s just the ninth best opening weekend of Cruise’s career, behind films like War Of The Worlds, the first three Mission: Impossibles, and even Interview With The Vampire. This is why we can’t have nice things, people.

In fourth place on the box-office chart was X-Men: Days Of Future Past, the latest installment of the long-running comic-book franchise. With last weekend’s $14.7 million haul, this all-star installment has now grossed $189 million in the United States; it’s currently the fourth-biggest movie of 2014, and will leapfrog The Amazing Spider-Man 2 into third place some time in the next couple of days. Rounding out the weekend box office top five, the Western misfire A Million Ways To Die In The West dropped 57 percent and grossed an additional $7.1 million, for a 10-day domestic total of $30 million. Director Seth MacFarlane’s Ted made more than that in its first three days in theaters.

The only film that drew more revenue per theater than The Fault In Our Stars last weekend was Obvious Child, the well-received romantic comedy starring Jenny Slate as a woman who gets pregnant after a one-night stand and considers having an abortion. In three U.S. theaters, the film grossed $81,000, for an impressive PSA of $27,000. The Fault In Our Stars was no slouch in the PSA department either, though; its $48.2 million on over 3,100 domestic screens, works out to a PSA of $15,191.