The Are You Here trailer brings together Owen Wilson, Zach Galifianakis, and Matthew Weiner 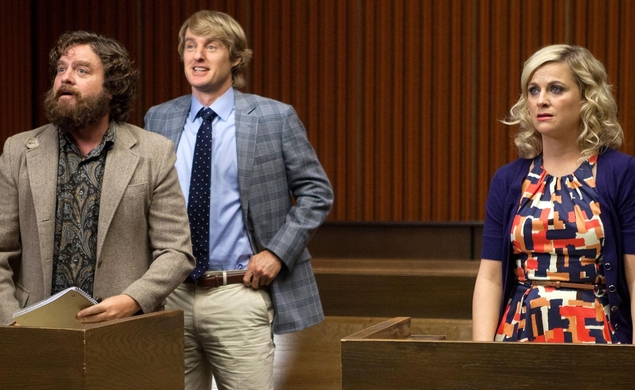 One of the most disappointing movies to screen at last year’s Toronto International Film Festival was the indie dramedy You Are Here, the feature filmmaking debut of writer-director Matthew Weiner, who’s best-known for creating and shepherding the classy cable TV drama Mad Men. Weiner got his start in television writing for sitcoms (Becker, most prominently) before moving on to The Sopranos and then Mad Men, so the prospect of him making a movie with comic actors Owen Wilson, Zach Galifianakis, and Amy Poehler wasn’t completely out of character. But the movie’s slim plot—which has Wilson playing a sleazy TV weatherman who hopes to get rich when his mentally unstable stoner pal (Galiafanakis) inherits his father’s estate—didn’t provide enough of a hook for most critics to forgive You Are Here’s rambling, joke-free improvs, or Weiner’s clichéd, one-dimensional depictions of slackers, nags, neo-hippies, and the mentally ill. The reaction to You Are Here at TIFF ranged from, “Ragged, but not too bad,” to, “Jesus, has Mad Men been this shitty all along and I never noticed it before?”

Since that quasi-disastrous TIFF debut, You Are Here has reportedly been recut, and retitled Are You Here. Does the first trailer reflect those changes? Let’s take a look:

Well, this trailer is, undeniably, for a movie called Are You Here, not You Are Here. So that’s different. Otherwise, aside from a more saccharine, sentimental tone, I’m not seeing much here to distinguish this movie from the one I hated at TIFF. There, I wrote:

“You Are Here is a fairly routine story of lost boys transformed by the combination of a major life event and an extended stay in a small town, but while Weiner tries to toughen it some by making Ben’s instability more than just a quirk, the premise and the jokes alike are way too weak. It’s rather alarming, given how good Weiner can be… I watched You Are Here strongly hoping it would take a turn and find a raison d’être, but I gave up on it right around the time that I was being asked to laugh at Owen Wilson chasing a chicken around a farmyard.”

I still love Mad Men—especially the last two episodes of the most recent half-season—so I’m willing to give Are You Here another chance when it comes out this August. But this trailer strikes me as just as shrug-inducing as the film I squirmed through last year.