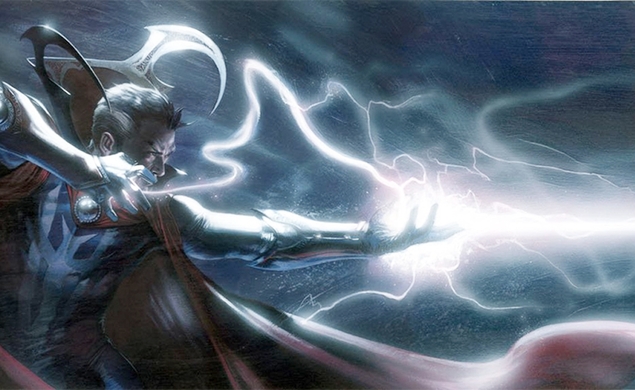 Marvel’s troubled Ant-Man still doesn’t have a director to replace Edgar Wright (the current Interweb scuttlebug is that We’re The Millers’ Rawson Marshall Thurber is the latest filmmaker to pass on the project), but the comic-book company is having significantly less difficulty attaching someone to their film about Doctor Strange, Marvel’s most powerful magician. Variety reports that Scott Derrickson, director of the 2012 horror film Sinister and next month’s Deliver Us From Evil is in talks to make Doctor Strange, which Derrickson himself confirmed in a tweet:

My next movie will be STRANGE: pic.twitter.com/5pdbO6Op6j

For my money, Derrickson’s a strong choice; he’s proven his horror chops on smaller movies like Sinister, but he’s also got experience on bigger projects too, like 2008’s The Day The Earth Stood Still. It also suggests that Doctor Strange could be part-superhero, part-scare-flick, which sounds terrific, and certainly in keeping with the material, which is about a surgeon who becomes a powerful sorcerer and fights interdimensional ghouls like Dormammu, which is maybe the most fun name to say in all of comic books.

The general fear from discerning geeks after Wright’s departure from Ant-Man is that Marvel is tightening the reins on their directors, and exerting even more control over the creative aspects of all their movies. And while that certainly might be the case, it’s nice to see they’re still recruiting interesting, talented filmmakers. Hopefully Doctor Strange feels like “a Scott Derrickson movie” and not just a Marvel movie that happened to be shot by Scott Derrickson.