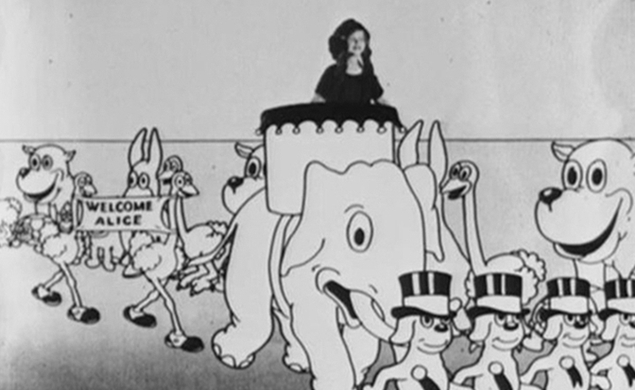 In 1923, Walt Disney was close to being out of the motion picture business, having failed to set the world afire with his Kansas City-based animation studio Laugh-O-Gram. But then, just as Disney was close to bankruptcy, he was hired to make an educational film about dental care (“Tommy Tucker’s Tooth”), and he took the fee from that gig and rehired some of his animators (including Ub Iwerks, Hugh Harman, and Rudolf Ising, the former of whom became one of the first creative geniuses of Walt Disney Studios, and the latter two of whom later co-created the Looney Tunes and Merrie Melodies series). Chasing current trends in animation, Disney borrowed an idea from Max Fleischer’s “Out Of The Inkwell” cartoons—itself a descendent of Windsor McKay’s animation-centered vaudeville act—and combined live-action and animation in a test cartoon called “Alice’s Wonderland.” Disney brought the film with him when he moved to Los Angeles, and in 1924, he got backing for a whole series of Alice shorts, which proved to be a major step on the way to Mickey Mouse, and then industry dominance.

In Richard Schickel’s 1968 book The Disney Version, Schickel said this of the Alice series:

“It is difficult to imagine just what anyone saw in the Alice films. Even compared to the low grade maintained by their competitors, the Disney pictures were feeble. Alice was nice and she was conventionally pretty, but she had no real character beyond a certain willingness to try anything and therefore get into ‘situations.’ The animals that accompanied her were, at best, sketchily drawn and lacked the strong element of caricature, in both features and movement, that is the mark of good animation; indeed, most of the time their definition was so weak that nothing could be seen except the broadest outline of their shapes and movements. The Disneys, even quite well on into their career with Alice, had still not learned how to find ways for the animation camera to approximate the flexibility of the live-action camera. There were no close-ups, no odd angles, few variations in the camera’s basic point of view, which was well back from its subjects and observed them head-on. Since backgrounds were still being kept to a minimum, the overall impression one gains on seeing an Alice film today is of tiny figures cavorting in a white void. Typically, its jokes look as if they had already been stale at the time Disney and his helpers originally made use of them. Finally, there is none of the fast-paced rhythm, none of the careful construction of a gag line, building, building, building to an inevitable, and inevitably hilarious, climax as the silent comedians were so brilliantly doing at this time and that Disney’s organization was itself to master within a very few years. In short, Alice In Cartoonland was, by and large, a limp, dull, and cliché-ridden enterprise.”

Schickel isn’t necessarily wrong. “Alice’s Wonderland” in particular is more exercise than entertainment. If not for its historical importance, the short would likely have been quickly forgotten. But that historical importance isn’t negligible. The animation is repetitious, and the gags aren’t that clever—with the sole exception of one scene where a lion removes its dentures and files them extra-sharp before going after Alice—but it’s fascinating to get a glimpse at an animation studio circa 1923, and to see the way Disney and his collaborators worked around the problem of having their star, Virginia Davis, interact with animated animals, decades before the effects breakthroughs of Who Framed Roger Rabbit. Sometimes, the world Alice enters resembles a painted movie screen; sometimes Alice herself looks like a projection. But by labeling the world Alice visits as “Cartoonland,” Disney and his team captured the way the fantasy worlds of books and movies seem to children, who dream about crossing over into that realm of endless possibility. Disney was just starting to tap into something: not just a technical innovation, but an idea that would soon become his company’s guiding creative principle.